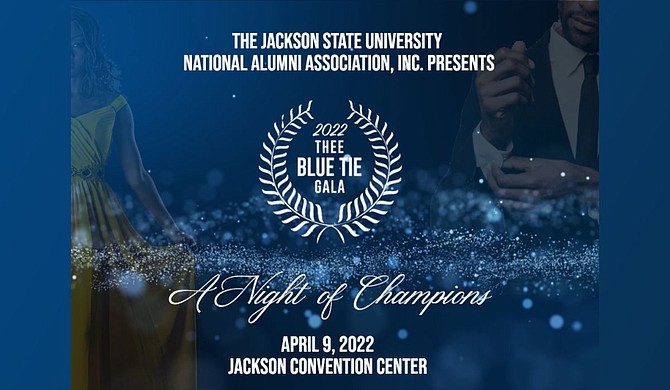 Jackson State University’s National Alumni Association will host its fifth annual Blue Tie Gala on Saturday, April 9, at 7 p.m. at the Jackson Convention Complex in downtown Jackson. The fundraiser will recognize 15 individuals for their contributions to JSU’s legacy, and 30 students will receive scholarships to attend JSU.

JSU alum and comedian Rita Brent is hosting the event, which will also include music from Unfazed Show & Band, a silent auction and a 360 photo booth.

Before the gala, VIP guests and sponsors will receive a private tour of the legends hall exhibit, where guests can meet with JSU alumni such as Robert Brazile, Robert Braddy, Connie Payton, Dr. Walter Reed, Dr. Rod Paige and President Emeritus Dr. John A. Peoples, Jr., to name a few. The gathered alums will tell their own story through a collection of memorabilia.

Although the event is sold out, people can still donate to the JSUNAA scholarship fund at jsunaa.org and clicking "Give to JSU." For more information and a full list of JSU alums being honored at the event, visit here.

JSU and Regions Bank have partnered to launch a new personalized debit card. The JSU card is available exclusively to Regions’ customers.

Existing customers can order the card through Regions branches, by calling 1-800-REGION, or through the online Regions YourPix Studio® at regions.com/yourpixstudio. Those without a current checking account can open one online or visit their local Regions branch and select the JSU card. The JSU debit card can be used with all Regions Bank personal checking accounts, including checking accounts for students.

For more information on collegiate cards and other options available to customize a debit card, visit yourpix.regions.com.

Under the project, MSU’s Research and Curriculum Unit will partner with TRANSFRVR, an education software company that provides hands-on VR training to Fortune 500 companies. VR simulations will introduce students to middle-skill jobs that do not require a four-year degree.

EMCC will house VR labs at the Communiversity in Columbus and its Scooba campus to enhance training for its students and individuals in the workforce with support from the Golden Triangle Planning and Development District, Golden Triangle Development Link, PACCAR Inc. and Oktibbeha County Hospital.