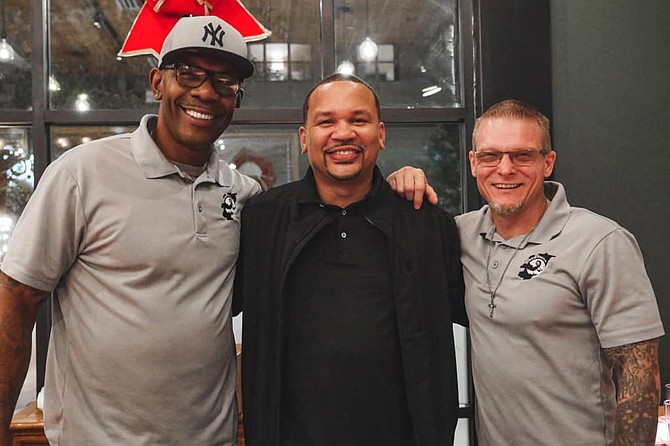 From left: John Knight, Terun Moore and Benny Ivey have all experienced life in prison and now mentor criminal-justice-system-involved young people as credible messengers with the Strong Arms of JXN. Photo courtesy Strong Arms of Jxn

The message warmed John Knight’s heart. One of his young mentees wanted Knight, a formerly incarcerated facilitator of the capital city’s Strong Arms of JXN credible-messengers program, to know how much his focus on school and performance has improved since his involvement in the program.

After Knight examined the report card the young man sent over, he told him he was happy for him. “I’m very proud of you,” Knight told him.

‘I’m proud of myself,” the young man answered.

“Now you are talking,” Knight says he responded. “When you (are) proud of yourself for doing something that you could have been doing, but you chose not to because you were doing some other things, that lets me know that you’re growing and you’re listening.’”

Knight grew up getting in trouble in the Washington Addition, once a thriving neighborhood south of Jackson State University that fell into crime patterns due to systemic disparities and poverty. But the last time he left prison, Knight was determined to reach young people to convince them not to follow the same destructive path he did.

Transitioning from being a drug dealer and street-gang leader in Jackson to a mentor who encourages at-risk youngsters, Knight has realized his ambition lies in assisting the future generation and helping them avoid lives of crime and imprisonment. He now works daily to interrupt crime and violence that spreads like a virus without early intervention, and before police get involved if possible.

Plain-spoken John Knight is part of the Strong Arms of JXN organization, which launched in 2018. He serves in two capacities in Hinds County: as a peer counselor at Henley-Young Juvenile Justice Center and as the truancy director for the youth court. The Strong Arms of JXN gathers formerly incarcerated individuals devoted to showing young people alternate paths from the ones they at one point chose and have since turned away from.

Preventing dropouts, as well as negative police contacts with juveniles, are both key components to preventing violence in Jackson, a BOTEC Analysis study of the capital city’s crime reported in 2016. Both are top precursors, the experts warned, to a young person committing worse crime and violence as as an adult.

In August 2021, Youth Court Judge Carlyn M. Hicks established a truancy early-intervention program. If a child misses 18 days of school, truancy officers for Jackson Public Schools, the Hinds County School District and the Clinton Public School District notify the Youth Court. Then Knight, as the truancy director, will contact school officials and connect the families with resources to help the children remain in school, thus making it a more positive experience than a police officer knocking on their doors.

“So that’s a battle, but it’s a good battle to fight because as you are in the process of trying to influence them to go to school, you could teach them things in the same process.”

The approach also limits those negative police interactions that contribute to young people getting in worse trouble later, as the BOTEC researchers warned.

‘Keep Them from Losing Their Lives’

As peer counselor, John Knight respectfully converses with young people, asks them questions about their lives and shows them how to avoid pitfalls, all strategies in line with the Strong Arms of JXN credible-messenger model, which is based on the Cure Violence violence-interruption approach, which has met with success in cities across the country.

“That’s the whole goal of our program—we are trying to keep them from losing their lives to the prison system or to someone taking their lives on the streets,” he said.

After Henley-Young Juvenile Justice Center Operations Manager Eddie Burnside and Judge Hicks heard his story, Knight said they allowed him to start working at the facility some months ago. He now goes to his office there every day.

Judge Hicks told the Mississippi Free Press by phone on Jan. 13 that having rehabilitated people mentor young people who have been in the criminal-justice system in the past is impactful.

She has seen the impact that the Strong Arms of JXN Credible Messenger Program had on young people the court referred to it since 2021 as well as their work at the Henley-Young Juvenile Justice Center. The judge said she scrutinized the group before her court got involved.

“I investigated this credible-messenger program myself,” she said. “And I was quite pleased with how they took individuals who had lived experience, and who had shown themselves to be rehabilitated, and are now in the community doing work to ensure that young people who are at risk of becoming delinquents don’t follow that same path.”

“Since their involvement, the rates of violent incidents (at the Henley-Young Juvenile Justice Center) have decreased dramatically,” she added.

Benny Ivey, co-director of the Strong Arms of JXN credible-messenger program, told the Mississippi Free Press on the phone on Thursday, Jan. 13, that the organization regularly goes to the Henley-Young Juvenile Justice Center. Ivey was formerly incarcerated in a juvenile detention center and later in adult prisons for crimes ranging from cooking meth to aggravated assault.

The former Central Mississippi Regional Captain of the Simon City Royals, a white street and prison gang, said he began to get clean from meth addiction and the street life in 2010 and has remained so since then.

“We go into Henley-Young, and we mentor the youth there twice a week,” he said. “We now have an office at Henley Young in which we have our credible messenger—John Knight—who is there every day.”

Mayor: ‘New Hope in Their Eyes’

Mayor Chokwe A. Lumumba has seen the impact of credible-messenger involvement with young Jacksonians as necessary to stem and prevent criminality.

Judge Hicks said, based on recommendations, she refers children to the mentorship program. “And once they are released from the detention center, they connect with those young people in the community,” she said.

In this way, Strong Arms of JXN build a chain of assistance and redirection for young people to deter the viral spread of violence one of them might commit later.

Ivey told the Mississippi Free Press that since the program began training sessions last year, it had graduated one group, and another is undergoing the same three-month mentoring program.

Out of 10 juveniles from 13 to 17 years old, who were sent to the Strong Arms organization last year for that session, seven showed up, and most have not gone back into the criminal-justice system, Ivey stated. He said some did not show up because of transportation problems—a very common problem for young people trying to connect with helpful programs in Jackson—but now, the group has hired somebody for that purpose.

“Out of the seven, I think one young man went back to the detention center a couple of times for marijuana use,” Ivey said. “He wasn’t committing crimes, and he wasn’t breaking into stuff or stealing or shooting or stuff like that; he was just continuously smoking marijuana, and he was in drug court.”

“We had one young man that actually caught a charge and went to jail, but that’s it,” he added. “All the rest of our young men, they had been doing good; they’ve been staying out of trouble; they hadn’t been going and getting locked up.”

The mayor said he was at the graduation exercise for the first group and said he witnessed the program’s impact on the participants.

“I had the opportunity to join them at a graduation exercise for some young people who had that early experience, with some negative experiences, and being involved with the criminal-justice system—on the wrong side of that.” After going through the Strong Arms program, Lumumba added, he could “see new hope in their eyes, see people looking at them in a different way, hear them speak about how they wanted to be a part of the solution while also recognizing the challenge of what they were up against.”

Ivey said that out of 10 participants that started out, seven graduated, two with full-time employment. “One went all the way and got his (Commercial Driver’s License) and is driving an 18-wheeler now,” he added.

The Strong Arms of JXN recently got the key to the Sykes Park Community Center (520 Sykes Road) from the City of Jackson, and is now holding the training programs there.

“I already purchased two PlayStation 4s, and we’re going to purchase two big flat-screens to put on the wall with some furniture around them so that young people can hang out and play games with each other,” Ivey said. “We’re going to put a rap studio in one little corner of the community center; we’re going to have to buy those items needed to do that—a little mixing board, microphone and stuff like that.”

Benny Ivey said seven people have shown up for the latest mentorship session,.

“It seems to be that this new group that we have just started, we’ve had a lot more parents show up with these kids,” he added. “So we’re hoping that we have more parental involvement with this one.”

At the Jan. 10 press briefing, the group’s co-director and co-founder, Terun Moore, also formerly incarcerated, said that the programs they create are avenues to show love to the young people in the city.

Moore got a life sentence for an attempted robbery as a teenager that resulted in a death at Jackson’s Lake Hico Park. The life sentence was found invalid in 2001 due to his underage status, and he got out of prison in 2017 after serving 19 years.

“We have got to reach our young people, but we need other community people to partner in and really try to love our children and not point the blame at them or feel like we need to do something after they get in trouble, but reach them before they get in trouble,” he said.

After the initial three months in the mentoring program, the participants go into the alumni-support component for another months-long mentoring session, Ivey told the Mississippi Free Press. He said they focus on building relationships.

“We want them to understand that we want to be like their big brothers; we want them to know that they can believe us, they can trust us, they can confide in us, and they can lean on us,” he added. “And you know, that’s one big thing that these young men are lacking in their lives, and that’s love.”

“We want to be a conduit of love to these young men, and so we can maybe hopefully change the trajectory of their paths.”

Henley-Young Juvenile Justice Center peer counselor Knight’s experience, and what he modeled for others, included suffering a pill overdose, getting shot six times and serving an eight-and-a-half-year sentence at the Mississippi State Penitentiary in Parchman, as well as working on a Hinds County farm. He explains that many young people get into trouble because they are trying to emulate the behaviors of others.

“A lot of these kids don’t just wake up today and say, ‘I want to be a criminal today. I want to rob somebody. I want to carjack somebody. I want to break into somebody’s house,’” he told the Mississippi Free Press. “This is a process that will happen over the course of years or a period of time, maybe some months of seeing somebody else doing it. They think it’s cool.”

“So these young men that we deal with, some of them have been stuck, and some of them are about to be stuck,” he added. “So we use the best of our training and abilities to get them unstuck and get them back on the right road.”

Learn more about the Strong Arms of JXN and how you can help here.