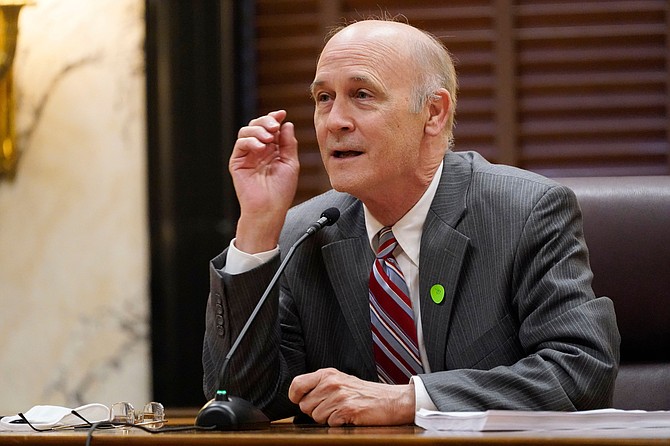 Sen. Hob Bryan, D-Amory, spoke in opposition to the bill Wednesday. He criticized lawmakers who claim cutting taxes will attract more people to Mississippi, saying the state’s stagnating population “doesn’t have much to do with our tax policy.” Photo by Rogelio V. Solis via AP

The Mississippi Senate approved legislation to reduce the state income tax by hundreds of millions of dollars Wednesday, despite caution from opponents who questioned the wisdom of doing so while education, roads and other public infrastructure remain critically underfunded.

The Senate plan is more moderate than one the Mississippi House passed in January that would have eliminated the state income tax entirely. This version eliminates the 4% tax bracket across a four-year period, cuts the grocery sales tax from 7% to 5% and eliminates state fees on car tags. Mississippi is one of only three states that taxes groceries at the full sales tax rate without offering any tax offsets.

During debate on the Senate floor Wednesday, Sen. Josh Harkins, R-Flowood, said the plan, Senate Bill 3164, would eliminate about $446 million in state income tax. Lawmakers in both chambers say revenue cuts are possible because of an abundance of funds in state coffers, including federal pandemic assistance.

At Odds with Governor’s Choice

That approach puts the Senate plan at odds not only with the House bill, but also with Gov. Tate Reeves, who said in a tweet Tuesday that he is “110% in support of eliminating the income tax because I’m 1,000% positive that putting more money in Mississippians’ pockets is the right way to grow our economy.”

During remarks on the Senate floor, Harkins addressed the concerns of Republicans who want a more substantial tax cut.''

“(Under this plan), a married couple filing jointly wouldn’t pay income tax on the first $26,026 they make. But the good thing is we are free to cut taxes again (later), and if you’ve been here as long as I have, this isn’t the first tax cut you’ve seen, and I know it won’t be the last,” he said. “But it’s certainly a responsible way to do so.”

Under the Senate plan, Mississippi taxpayers will receive rebate checks between $100 and $1,000 per filer.

Sen. Hob Bryan, D-Amory, spoke in opposition to the bill Wednesday. He criticized lawmakers who claim cutting taxes will attract more people to Mississippi, saying the state’s stagnating population “doesn’t have much to do with our tax policy.”

“It’s a sad situation that we’re here having this debate and not focusing on the critical needs the state has,” the Democratic lawmaker said. “I’ve not mentioned all of them, but you know what they are. Just think about your folks back home. Are they clamoring for a tax cut, or are they clamoring for roads, water and sewer and schools and broadband?”

Mississippi is one of the most federally dependent states in the nation, receiving about $3 from the U.S. government for every $1 it pays in federal income taxes.

Mississippi is home to some of the most underfunded schools in the nation. Teachers in the Magnolia State also have some of the lowest salaries in the country, though pending teacher pay-raise legislation in both chambers could soon change that.

Unlike the House plan, the Senate version does not raise sales taxes to make up for revenue lost from income-tax cuts.

“So which is it? Is Mississippi so broke that we can’t afford to provide for our children and teachers? Or is Mississippi so flush with cash that we could easily afford to fund our priorities—and give away hundreds of millions of dollars? It cannot be both,” the Parents Campaign said in a Feb. 8 post on its website.

The Republican-controlled Senate voted 40-11 to advance the bill, with some Democrats joining all Republicans to pass the bill. Democrats cast all votes against the plan.

For either the House or Senate tax plan to become law, Senate and House leaders will likely need to work out an agreement for a plan that could pass both chambers. A Mississippi House tax-cut elimination bill died without a vote in the Senate when the 2021 legislative session ended last spring.