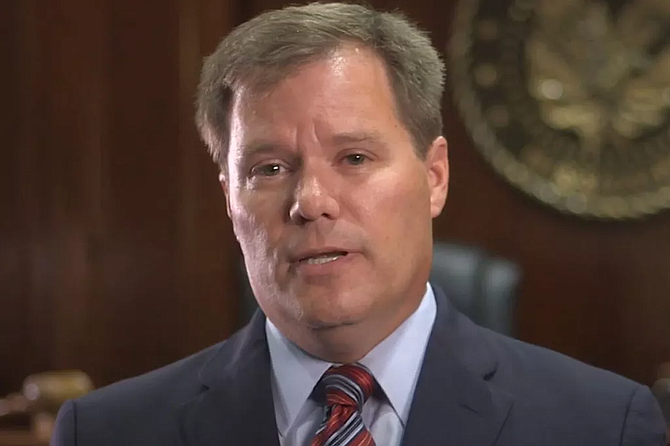 Madison/Rankin County Circuit Court Judge Dewey Arthur walked into courtroom 1 of the circuit courthouse in Canton at 9:06 a.m. on March 28, 2022. His first order of business was the sentencing of 34-year-old Carlos Dominique Allen for drug offenses.

Before the sentence, Assistant District Attorney Todd McAlpin told the court that the judge should treat Allen as a habitual offender.

In Mississippi, someone facing a conviction for a second drug offense faces twice the maximum years in prison. Someone with two prior felony convictions gets the maximum sentence for the crimes as a habitual offender. If a plaintiff gets sentencing enhancement for being both an habitual offender and a subsequent drug offender, the court will double the maximum number of years for the crime. In both cases, the offender will serve without the possibility of parole or probation.

McAlpin provided evidence that in 2013 in Lauderdale County, Ala., Allen received a sentence of three years and three months in the Alabama Department of Corrections for drug possession. In 2016, a judge sentenced him to 10 years of imprisonment for assault in the second degree in the same county, McApin added.

“Not as far as the subsequent drug offender or habitual offender (issue).”

“Anything from the defense on the subsequent offender and habitual-offender issues?” the judge asked, turning to defense attorney Gerald Mumford.

Before sentence pronouncement, the prosecution called on Mississippi Credit Union Association President and CEO Charles Elliott to testify. His child, Austin Elliott, died one year ago—on Feb. 23, 2021—from a fentanyl overdose after allegedly purchasing the drug from Allen.

Austin Elliott graduated from the University of Mississippi in mid-2019 with a business degree, majoring in management and minoring in entrepreneurship. His mother, Tina Elliott, told the Mississippi Free Press that he started using drugs during the COVID-19 pandemic.

A couple weeks after he first tried opioids drugs, Austin thought, “I can see why people can get in trouble with this,” Tina Elliott recounts of Austin’s experience. “So we took him to the doctor, and (he) never had any more problems.”

Tina Elliott explained that Austin went out with a friend for dinner at around 6 p.m. that Monday and took half a pill of what he allegedly got from Allen.

“He met Carlos through a friend that he went to high school with; he mentioned that they were friends,” Tina Elliott said.

After taking the tablet, Austin passed out in the restaurant’s parking lot. Tina Elliott explained that after an ambulance got to him, a paramedic injected Austin with Narcan, a medication designed to reverse the effects of opioid overdose, which depresses the central nervous system’s functioning, including breathing. The ambulance took Austin to a hospital.

Tina Elliott said that Austin cried tears of joy in the hospital. “I’m grateful to be alive. I’ve got y’all; everything’s going to be fine,” Austin said between tears.

“Honey, the Lord’s not done with you, yet,” Tina replied.

Austin Elliott came back home around 12:30 a.m. on Feb. 23, 2021. He ate some food, was in good spirits, started getting ready to sleep, and everything seemed alright, Tina Elliott remembered.

Madison County Sheriff’s Office deputies arrested Allen later that day, and the district attorney’s office subsequently charged him with possession, sale and trafficking in fentanyl, as well as possession of hydrocodone and amphetamine.

Back to the Courthouse

In the courthouse on March 28, 2022, Austin Elliott’s father, Charles Elliott, advocated for the maximum sentence for Allen.

“Austin made a horrible decision, but he did not deserve to die,” Charles Elliott said. “Austin was going to get married. … We were going to have grandchildren.”

“It’s been our hopes and our prayers that Austin will be the last person to die as a result of the defendant,” he added. “Your honor, we pray that you make that a reality today.”

Allen’s younger brother, Delandrez Allen, an active-duty soldier stationed at Fort Campbell, Ky., asked the judge for leniency when he took the stand. He explained that his brother moved from Alabama to Mississippi with his wife and children six years ago to start a new life.

“Since he’s been here, he maintained employment and attended college and graduated with honors, and was deepening his faith and attending a church there in Jackson, Mississippi”

Defense attorney Mumford asked him, “You’re not asking for your brother to go unpunished, are you?”

“No,” Delandrez Allen answered, “but I’ll just ask that the judge has leniency in his judgment today. I would like the judge to acknowledge that he has young children, a wife, and I don’t doubt one bit that he can be rehabilitated.”

“I think that he should be at least given the opportunity to at some point be there for his children and at least be able to raise them so that they can be productive citizens in life.”

“Austin Elliott, you know, he was a friend of mine, so I would just like to send my condolences to his family,” he said, addressing the court. “Our prayers are with them regardless of what things may have looked like or whatever they may be in. I have nothing further.”

Later, Judge Arthur said that as a subsequent drug offender and a nonviolent habitual offender in Mississippi, Allen faces 40, 160, 12 and 12 years for each of the four indictments, totaling 224 years. In his sentencing order, however, the judge wrote that Allen will serve 100 years in prison “without early release or the possibility of parole.”

“Pills, in this case, were manufactured in a way to resemble legitimate pills, but they weren’t,” Judge Arthur said in court. “Your statement on tape was basically (that) people are dying from these, and you sold them anyway.”

“This court has rarely seen somebody so heavily involved in the trafficking of narcotics, and this court just can’t get past the fact that you knew these pills kill, and you sold them anyway,” he added. “The basic reason for this court’s sentence (is) it has to send a message: You can’t sell death in Madison County, Miss.”

Next: Torrey A. Powell

After the end of Allen’s sentencing, it was time for 42-year-old Torrey A. Powell to face the judge for his own sentencing.

Madison/Rankin County District Attorney’s Office wrote that on April 29, 2020, a Madison police officer stopped Powell on the road, while the suspect was driving.

“The officer found Powell did not have a valid driver’s license or insurance and asked Powell to step out of the car,” the release continued. “For safety reasons, Powell was patted down, where a pill bottle was found in Powell’s front pocket.”

While Powell faced the judge on March 28, 2022, seated beside his counsel, Bentley E. Corner, Assistant District Attorney Ashley Allen told him to find that Powell was a subsequent drug offender and a nonviolent habitual offender. With no objection from the defense, the judge agreed. Allen then argued for maximum sentences for Powell.

“He has committed felony drug offenses in Georgia and Oklahoma in multiple counties in Mississippi, and that’s just the ones that I can remember off the top of my head,” Allen said. “The State urges this court to sentence Mr. Powell as both a subsequent and nonviolent habitual offender and to run each of those charges consecutively—because I do not believe that any time that he spends back out in the free world after he receives and serves his sentences will be spent being a productive member of our society.”

However, defense counsel Corner pleaded that the court deviate from following the statute by considering Powell’s health condition. “Mr. Torrey is a heart patient; he has a pacemaker—he’s had two heart attacks since he’s been in jail,” he said.

Corner argued that a maximum sentence without the possibility of probation or parole means Powell will not be eligible for medical release due to his heart condition. “He has already served almost a year in pretrial detention, so he (would have been) eligible for that medical release after he’s been seen by the hospital and the doctors to determine whether or not his heart condition is deteriorating while in prison,” he said.

“So we’ll urge the court to sentence him to a number of years without the mandatory nonviolent habitual offender provision that would keep him from being eligible even for a medical release or for a release at age 65,” Corner concluded.

While addressing the court before his sentencing, Powell explained that he had been a drug addict, which can lead to his trouble with the law, and asked for leniency. “I’d spend 42 years of my life to finally realize that my drug use will be the death of me,” he said.

The judge, nevertheless, sentenced him to 40 and 16 years for two counts of methamphetamine possession. “All those sentences will be served without the possibility of parole or probation, any early release whatsoever,” he added. “The defendant is sentenced as a habitual offender.”

In another Madison/Rankin County circuit courtroom that day, Judge Brad Mills sentenced 42-year-old Lucas Montel Howard as a habitual offender “to serve (60) years after a jury convicted him of Possession of Cocaine with the Intent to (sell) and Conspiracy to Sell Cocaine,” a Madison/Rankin County District Attorney report said.

Seven Mississippi legislators filed 13 bills in the 2022 legislative session to reform the habitual-offenders’ laws in the state, but none garnered enough support to pass and go into effect.

Madison/Rankin County District Attorney John K. Bramlett told the Mississippi Free Press on March 28, 2022, in Canton, Miss., that he is not opposed to limiting the application of the habitual-offender laws.

“There’s some talk now of maybe making it where you can’t go back forever to pull up felonies,” he said. “I don’t have a problem with that,” he said. “In other words, if you were convicted of a crime in 1980 and 1982, and then you slipped back in 2022, you’ve had 40 years living a pretty clean life, I don’t think they should come after you as habitual.”

“So at some point, I think they’ll narrow down the years that you look back—15 years, maybe,” he postulated.