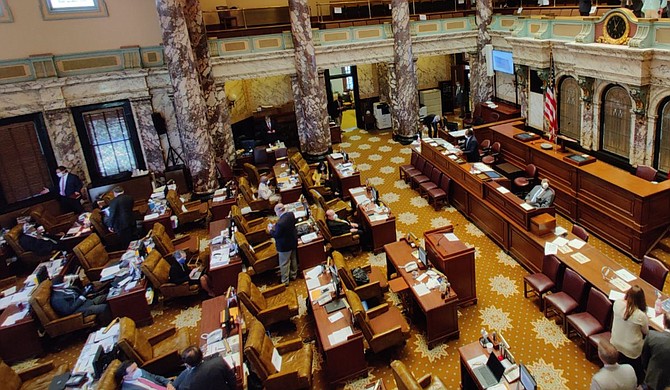 Mississippi legislators have finished their busiest session in years after enacting the largest teacher pay raise in a generation and setting the state's largest-ever income tax cut. Photo by Nick Judin

JACKSON, Miss. (AP) — Mississippi legislators have finished their busiest session in years after enacting the largest teacher pay raise in a generation and setting the state's largest-ever income tax cut.

After more than a year of economic uncertainty because of the COVID-19 pandemic, Mississippi's tax collections rebounded over the past several months, driven partly by massive federal spending for pandemic relief.

As they ended their session Tuesday, legislators completed work on two sets of spending bills.

The first was a state government budget for the year that begins July 1, using more than $7 billion in state money and billions more federal dollars.

The second was a plan to spend about $1.5 billion of the $1.8 billion Mississippi is receiving from the American Rescue Plan Act of 2021, a federal spending package aimed at revitalizing the economy amid the pandemic. Mississippi will use about $750 million for water system improvements.

“When you contemplate the number of issues we had before us this year, it was pretty staggering in the beginning,” House Speaker Philip Gunn, a Republican from Clinton, said as the session ended.

Mississippi will reduce its income tax over four years. Starting in 2023, the 4% income tax bracket will be eliminated. The following three years, the 5% bracket will be reduced to 4%. After the first year, the tax-free income levels would be $18,300 for a single person and $36,600 for a married couple.

Republican Gov. Tate Reeves signed a bill Feb. 2 to legalize medical marijuana for people with debilitating conditions. It became law immediately, but opening the first dispensaries will take months. In November 2020, Mississippi voters approved a medical marijuana initiative. The state Supreme Court overturned it six months later by ruling it was not properly on the ballot because the initiative process was outdated.

Mississippi could become the final state to enact a law requiring equal pay for equal work by women and men. A bill awaits action by the governor. Critics said the bill is harmful because it would allow an employer to pay a woman less than a man based on the pay history that workers bring into new jobs.

Millions of dollars will go to improve the condition of state parks. Leaders said Mississippi could apply for federal money to supplement the state spending.

State and local election offices are banned from accepting donations from outside groups for election operations, under a bill Reeves has signed. Mississippi joins other Republican-led states in setting a ban in reaction to donations that Facebook founder Mark Zuckerberg made across the U.S. in 2020.

The state Department of Health could issue up to five licenses for free-standing emergency rooms in rural areas, under a bill awaiting the governor.

Starting with the next four-year term, salaries would increase for the governor, lieutenant governor and six other statewide elected officials; the transportation and public service commissioners; and the House speaker, under a bill awaiting the governor.

In March, Reeves signed a bill banning schools, community colleges or universities from teaching that any “sex, race, ethnicity, religion or national origin is inherently superior or inferior.” It became law immediately. Several Black lawmakers said the limitations could squelch honest discussion about the harmful effects of racism.

Legislators voted to ditch “Go, Mississippi,” which has been the state song since 1962. It uses the tune of “Roll With Ross,” the 1959 campaign jingle of segregationist Gov. Ross Barnett. A bill designates “One Mississippi,” by singer-songwriter Steve Azar, as one new state song. It also creates a committee to recommend additional state songs from various genres. The bill awaits the governor's action.

WHAT LEGISLATORS DID NOT DO

House and Senate negotiators failed to agree on a plan to revive an initiative process that would allow people to petition to put issues on the statewide ballot. The Mississippi Supreme Court ruled in May that the state's initiative process was unworkable because it required people to gather signatures from five congressional districts the state had not used in decades.

The Senate passed a bill to expand postpartum Medicaid coverage, but Gunn and House Medicaid Committee Chairman Joey Hood killed it without bringing it up for a House vote. Mississippi allows two months of Medicaid coverage for women after they give birth. Advocates for low-income women say expanding the coverage to a year could improve health outcomes in a state with a high rate of maternal mortality.