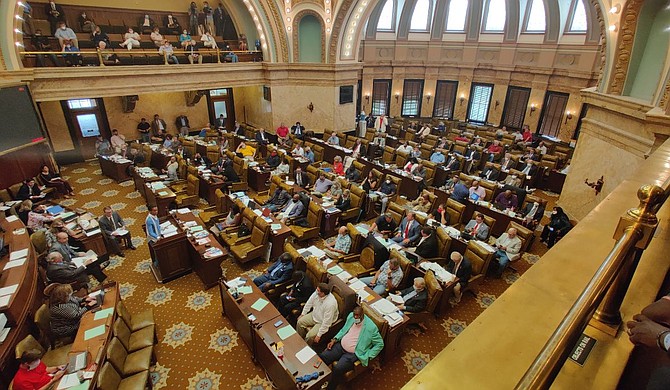 Mississippi legislators on Monday were approving parts of a state budget for the year that begins July 1, and it is substantially larger than the budget for the current year. Photo by Nick Judin

JACKSON, Miss. (AP) — Mississippi legislators on Monday were approving parts of a state budget for the year that begins July 1, and it is substantially larger than the budget for the current year.

The biggest state-funded portion of the new budget is nearly $6.3 billion general fund. With money from the Education Enhancement Fund, a Capital Expense Fund and two funds connected to Mississippi's lawsuit against the tobacco industry in the 1990s, total state spending will top $7.3 billion.

For the current year, the general fund is about $5.8 billion and total state spending is about $6.7 billion.

The budget for the new year includes money to pay for a teacher pay raise plan that Republican Gov. Tate Reeves signed into law last week. It also includes enough money to cover the increased cost of state employees' health insurance, so the employees themselves won't have to pay for the extra cost.

One big expense is $54 million for the Department of Human Services to buy a new computer system to replace one that's long outdated, said Senate Appropriations Committee Chairman Briggs Hopson, a Republican from Vicksburg. The federal government will also spend $95 million for the computer system, said House Health and Human Services Committee Chairman Sam Mims, a Republican from McComb.

Mims said the Department of Human Services budget includes a $1.7 million increase for home-delivered meals for older adults, Mims said. Democratic Rep. Omeria Scott of Laurel applauded the increase but said to Mims: “The meals that the people are getting are not good. ... These are elderly people. You would agree that they deserve our best, right?”

A budget bill for the state Veterans Affairs Board would allocate $19.7 million to move a state veterans' home out of Jackson to other state-owned property.

“I think they're looking at property in Rankin County,” Hopson said.

Legislators also were making plans to spend about $1.5 billion of the $1.8 billion the state is receiving from the federal government for pandemic relief, said House Appropriations Committee Chairman John Read, a Republican from Gautier.