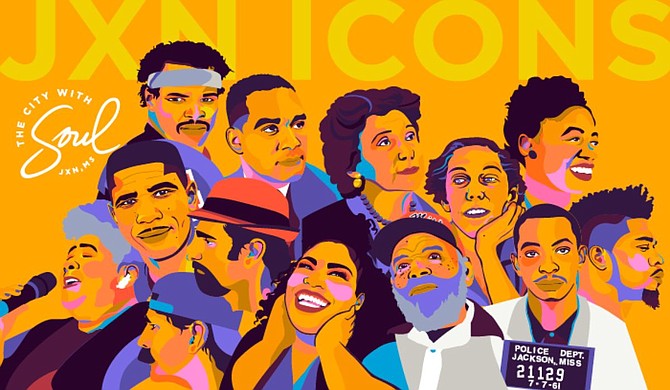 Visit Jackson recently unveiled a second phase for the JXN Icons mural on the back of the Old Capitol Inn on North Street. Visit Jackson’s Creative Design Manager, Reshonda Perryman, painted the first four Jackson Icons depicted on the mural in 2020. Photo courtesy City of Jackson

Visit Jackson recently unveiled a second phase for the JXN Icons mural on the back of the Old Capitol Inn on North Street. Visit Jackson’s Creative Design Manager, Reshonda Perryman, painted the first four Jackson Icons depicted on the mural in 2020.

Perryman's new Jackson icons include Dr. Margaret Walker Alexander, Angie Thomas and Richard Wright for their literary contributions; Dorothy Moore for her musical contributions in blues, gospel and R&B genres; Harold “Hal” and Malcolm “Mal” White for establishing Hal & Mal’s and the Hal’s St. Paddy’s Parade; James Meredith for planning and leading Mississippi’s largest civil-rights march, the March Against Fear; Hezekiah Watkins for his sacrifice and activism as the youngest Freedom Rider; and Walter Payton for his athletic prowess at Jackson State University.

The facility will feature 80 play activities, the majority of which are wheelchair accessible, as well as an outdoor pavilion and a museum walking trail. The playground is separated into different play areas based on age, for children ages 6 months to 12 years old. Shade structures cover 75% of the playground, making the area below up to 30 degrees cooler, a release from the MCM says.

Other upcoming additions to the LeFleur’s Bluff Education and Tourism Complex include Spotter’s Adventure Trail, an 8-foot-wide museum walking trail located east of the playground, and The Den, an outdoor pavilion with tables and seating for up to 50 students for field trips, events and museum programs. Both are scheduled to open in early summer 2022.

LeFleur’s Bluff Playground will be open Monday through Friday from 8 a.m. to 5 p.m., Saturday from 9 a.m. to 5 p.m. and Sunday from 1 p.m. to 5 p.m. Parking is available in the park and at both museums. Admission to the park is free.

S.T.E.M. with Snowflakes at Mississippi Museum of Natural Science

The Mississippi Museum of Natural Science will host an educational event called "S.T.E.M. with Snowflakes" on Friday, Dec. 3, from 9 a.m. to 12:30 p.m.

"S.T.E.M. with Snowflakes" will feature ice-fishing demonstrations, experiments with instant snow and an exhibit about Wilson Bentley, also known as "Snowflake Bentley," the photographer who first successfully captured snowflakes on film.

The event is included with museum admission, which is $6 for adults, $4 for children ages 3 and up and free for children under age 3. Admission is also free for visitors with a Mississippi Museum of Natural Science Foundation Membership. Masks are recommended.