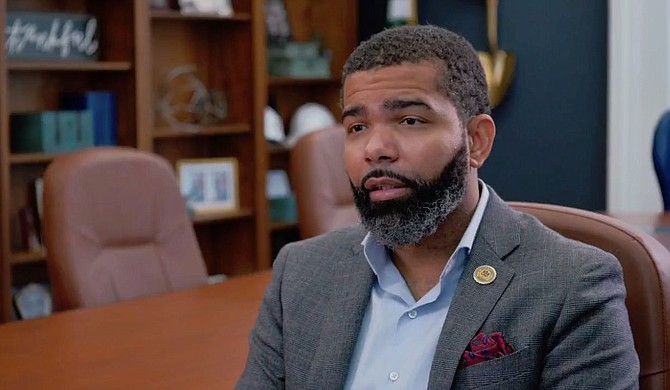 Mayor Chokwe A. Lumumba led other City officials to discuss the garbage-disposal contracting process with the public on Thursday, Nov. 18, at the New Horizon Church on Ellis Avenue. The mayor, at the event, disclosed that the City will focus on getting litter pickup and landscaping contracts. Photo courtesy City of Jackson

Conversations veered into the cleanliness and appearance of the City of Jackson during a garbage-contract townhall held on Thursday, Nov. 18, at the New Horizon Church on Ellis Avenue and streamed on Facebook Live.

City officials, under Mayor Chokwe A. Lumumba’s lead, facilitated the event, the second in as many weeks, with the first held on Nov. 11 at Fondren Church. Through the event, they aimed to explain the garbage-disposal contracting process following the debacle that ensued in the last round.

As the event wound to a close, attendees asked about the need to take care of the eyesores of illegal dumping and uncut grasses in the city.

Lumumba said his administration plans to initiate two different Request For Proposals to get firms to deal with those issues.

"We will issue a separate RFP for litter and illegal dumping," the mayor said. He added that the fact that Solid Waste Division Manager Lakesha Weathers sometimes has only one staff to deal with illegal dumping in a city of 150,000 is "not near sufficient."

"It is my pet peeve," the mayor added about illegal dumping in the city. "In fact, there is a company that is providing that service, and they are using returning citizens as a part of that process."

On July 20, 2021, the city council approved $200,000 for Ridgeland-based charity organization New Way Mississippi to utilize those formerly incarcerated to pick up litter throughout the city.

The organization, which offers support for those coming out of prison, will supply eight personnel divided into two cleanup teams, crew managers and a project manager as part of their contract with the city.

They will work with the city's Solid Waste Division to sort, load, and haul litter and other debris from major thoroughfares and streets in the capital city. The City will pay $13.02 per hour for 160 hours per week.

"I want a clean city," the mayor said Thursday. "What I would like to see (are) vendors who can not only pick up the trash across the city but incorporate the services of returning citizens and the unhoused."

‘We’ll Gladly Come Out and Assist’

Weathers said that though the Solid Waste Division is understaffed, they can assist neighborhoods by hauling debris after a cleanup exercise.

"We welcome you all to organize cleanups within your community," she told those gathered Thursday at New Horizon Church. "We do have the resources to come out and pick up any debris that's collected in your communities."

"So we welcome those communities to contact the solid waste office in developing their own cleanups, and we'll gladly come out and assist," Weathers added.

The mayor said that his administration wants to adopt a new way to handle grass-cutting across the city, saying that the Department of Parks and Recreation is not dealing with the issue efficiently enough.

"We're looking at a landscape service contract that enables us to deal with (grass)-cutting across the city," he said Thursday.