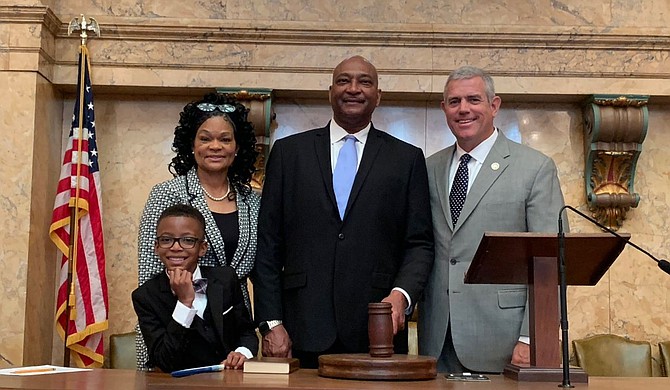 Democratic Rep. Robert Sanders of Cleveland took his oath of office during a small ceremony Wednesday in the House chamber. He served as sergeant-at-arms for the Mississippi Senate from 2000 to 2004. Photo courtesy Mississippi House of Representatives

JACKSON, Miss. (AP) — The newest member of the Mississippi House of Representatives used to be in control of security on the other end of the state Capitol.

Democratic Rep. Robert Sanders of Cleveland took his oath of office during a small ceremony Wednesday in the House chamber. He served as sergeant-at-arms for the Mississippi Senate from 2000 to 2004.

Sanders succeeds former Rep. Abe Hudson of Shelby, a Democrat who resigned in late August from the District 29 seat in Bolivar and Sunflower counties.

Sanders will serve the rest of the four-year term that ends in January 2024. He said Thursday that he intends to continue serving as a member of the Cleveland Board of Aldermen while serving in the House. That is allowed under state law because both jobs are in the legislative branch of government.

In addition to working as Senate sergeant-at-arms, Sanders has been police chief for the city of Shaw and for Mississippi Valley State University.

Sanders and one other person, Keveon L. Taylor, signed up to run in a Nov. 2 special election to succeed Hudson in the House. The Mississippi Board of Election Commissioners ruled Sept. 14 that Taylor did not meet the two-year residency requirement because he switched his voter registration to Lafayette County, where he is a University of Mississippi law school student.

The commissioners said no election was needed with only one candidate, and they declared Sanders the winner.

Taylor challenged the decision, saying he is a lifelong resident of Bolivar County and intends to return there after law school. A Hinds County circuit judge ruled in his favor, but the Mississippi Supreme Court overturned that decision. On Wednesday, a Hinds County chancery judge dismissed Taylor's request for another review of his claim.

Republicans hold a wide majority in the 122-member Mississippi House.