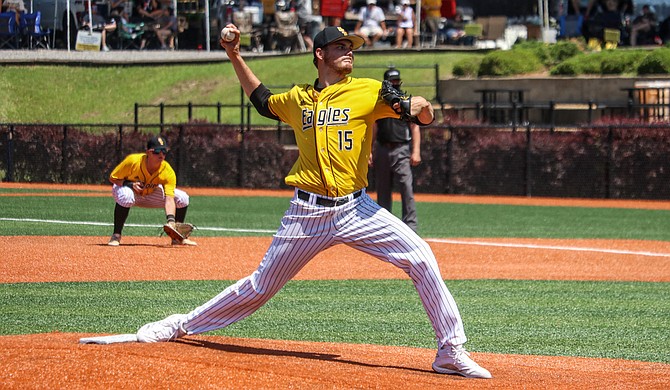 The University of Southern Mississippi has climbed to the top of the Conference USA West Division. USM earned a four-game sweep over Middle Tennessee State University to give the Golden Eagles a one game lead over Louisiana Tech University.

Pitching helped lead USM to the sweep as the Golden Eagles got several great outings on the mound. Game two against Middle Tennessee ended up being one of the best pitching performances of the season for USM.

Walker Powell shined in game two of the four-game series as he pitched a complete-game no-hitter and set a career-high in strikeouts with 12. Powell was a second inning walk from a perfect game. He went seven innings and finished the game with just 89 pitches thrown. USM picked up the 6-0 win.

Powell threw the first no-hitter for USM since Gabe Shepard, Cody Carrol and Hunter Stanley combined to achieve the feat in 2019 against Rice in the C-USA baseball Tournament. It was the first complete-game no-hitter in school history since Cliff Russum in 2004 against Eastern Illinois University.

This season, Powell has started in 11 games and has an 8-2 record on the season. He has a 2.69 ERA with 69 strikeouts and just 13 walks in 70.1 innings of work. Powell ranks as the active Division I leader in wins with 28 career wins. He is No. 3 on the USM career wins list with him trailing Darrell Lindsey with 29 career wins and Todd McInnis with 33 career wins.

Powell is tied for the lead in wins, fourth in ERA, fifth in innings pitched and earned runs with 21, sixth in walks and seventh in runs allowed with 26 in the conference standings. Powell has earned six C-USA Pitcher of the Week awards.

Southern Miss ends the regular season with a four-game series against Florida Atlantic University. FAU is currently in third place in the East division. Game one is on Friday, May 14, with a double-header on Saturday, May 15, and the final game on Saturday, May 16.

USM leads Louisiana Tech by one game and plays the University of Texas at San Antonio to close the regular season. UTSA is in third place in the West Division but at 13-14 in C-USA can’t catch either USM or Louisiana Tech to win the west.