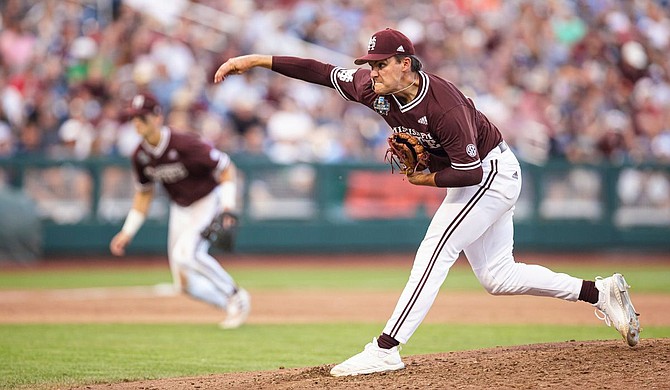 Pitcher Will Bednar has forever become a part of Mississippi State University lore. He was instrumental in delivering the first national championship in school history as the Bulldogs won the 2020 College World Series.

Bednar outdueled Vanderbilt University pitcher Kumar Rocker in game three of the three-game championship series. Rocker would end up being drafted 10th overall by the New Mets in the 2021 MLB Draft.

Rocker pitched 4 1/3 innings in the third championship game as he gave up six hits, five runs, four earned runs and two walks. He left the game as MSU built an insurmountable lead.

Bednar pitched six no-hit innings as he didn’t allow a single run by the Commodores with four strikeouts and three walks. He exited the game with a 5-0 lead as closer Landon Sims helped close the door on Vanderbilt for the 9-0 championship winning victory.

The Pittsburgh, Pa., native, made three starts in the College World Series and the Bulldogs won each game. The right-handed pitcher started the CWS against the Longhorns and pitched a gem of a game. He struck out 15 batters, one hit, and one walk in the Bulldogs 2-1 victory. His pitching in the opening game of the CWS set the tone for the Bulldogs in the tournament.

In three games at the CWS, Bednar pitched 18 1/3 innings with 26 strikeouts, five hits, three runs, three earned runs and six walks. His play got him named Most Outstanding Player of the College World Series.

The postseason run by Bednar almost certainly raised his stock in the 2021 MLB Draft. He ended up being selected 14th overall pick by the San Francisco Giants.

Bednar became the 18th First-Round pick in MSU baseball history. He is the eighth MSU player to be selected in the first 10 rounds since 2016. He is the highest right-handed pitcher selected in MSU history, beating Jay Powell, who was selected 19th overall in the 1993 MLB Draft.

He tied for the fifth highest pick in school history as he tied with Justin Foscue, who was selected 14th overall in the 2020 MLB Draft. Bednar is the seventh MSU player selected by the Giants and hopefully will join Will Clark, Jeff Brantley, and Chris Stratton who made their big league debut with the club.

No matter what happens in his major league career, Bednar will always be remembered for his masterpiece against Vanderbilt. He helped deliver a national title to one of the most passionate fan bases in college baseball.