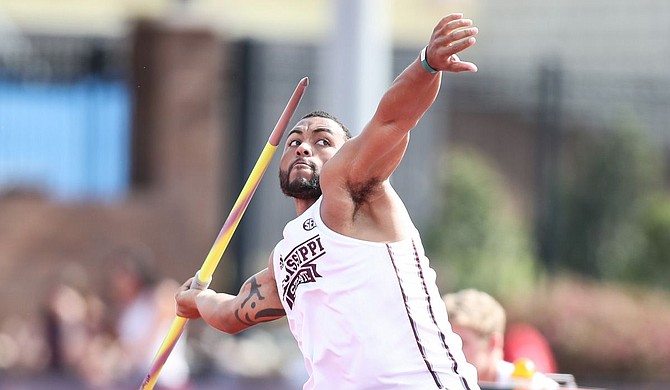 Due to COVID-19, Olympic dreams were put on hold for every athlete heading to the 2020 Tokyo Games. The wait was even longer for former Mississippi State University star Curtis Thompson.

Thompson finished second at the U.S. Olympic trials in 2016 in the javelin with a throw of 271-feet and 11 inches. That wasn’t enough to make the 2016 Olympics in Rio, Brazil due the fact he hadn’t reached the Olympic standard 278 feet and 10 inches. He also didn’t rank high enough in the ranking system used by the International Association of Athletics Foundation or IAAF.

The Florence, N.J., native left little doubt that he is the best javelin thrower in the nation. He started the U.S. Olympic trials with a throw of 263 feet and 7 inches to land in the top of the standings.

Once again, he wasn’t a lock to make team USA because he didn’t hit the Olympic standard of 278-feet and 10-inches. His throw of 271 feet and 7 inches places him No.18 in the world so far this year.

Thompson had to wait until after June 29 to see if he landed in the top 32 of the IAAF standings to qualify for the 2020 Olympic games. On Thursday, July 1, the former MSU star got notification that he would be part of team USA.

The 25-year-old finally achieved his goal of being an Olympian after a five-year wait. After just missing out on the 2016 Rio Olympics by 13 cm and waiting from June 21 to July 1, Thompson will enjoy his first Olympics in Tokyo.

Thompson isn’t the only former track and field Bulldog who will be in Tokyo this summer. MSU will see a total of six athletes from the program try to win Olympic gold.

Erica Bougard will be a member of Team USA and compete in the heptathlon. Her 16 All-American honors make her the most-decorated student athlete in MSU history and holds five school records.

Anderson Peters was a two-time SEC and NCAA Champion in the javelin for the Bulldogs from 2018 to 2019. He will try to defeat Thompson and the rest of the field in javelin as he competes for Grenada.

The javelin will begin Tuesday, Aug. 3, at 7 p.m. central time and the finals will be Saturday, Aug. 7, at 6 p.m. NBC and its family of networks including streaming service Peacock will show the games.