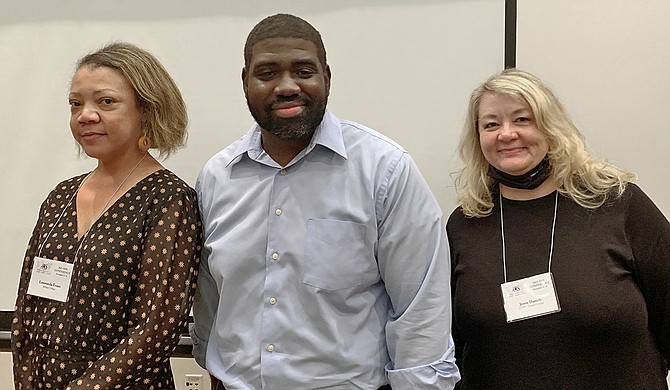 Jessie Daniels didn’t discover that she was fully white until she was in her mid-20s. Relatives had told her she was part-Cherokee, and she believed the common lie until college, when she realized that the set of moccasins passed through her very-white Texas family were not adequate proof of this supposed heritage.

In her 2021 book, “Nice White Ladies: The Truth about White Supremacy, Our Role in It, and How We Can Help Dismantle It,” the sociology professor at Hunter College, City University of New York demythologizes her family’s own fabrication of whiteness and what it means to be considered—at least in appearance—a “nice, white lady.”

In fact, Daniels contends that “nice, white ladies” have historically been responsible for perpetuating or directly causing a number of social injustices.

Daniels attended a meeting of the Association of Humanist Sociology in Jackson, Miss., organized by University of Mississippi sociology professor James Thomas on Saturday, Nov. 6. She joined Louwanda Evans, who serves as both an associate professor of sociology and the director of African American studies at Millsaps College, and Benjamin Saulsberry, the director of museum education at the Emmett Till Interpretive Center, to discuss the insidious ways that white women can inadvertently or intentionally contribute to systems of racial injustice.

‘It’s Hard for Me to Trust White Women’

Louwanda Evans, who said she was one of two Black women on faculty at the private college in downtown Jackson, said her daily encounters with race complicated her reading of the book. “I’m surrounded by ‘nice, white ladies’ all the time,” Evans remarked. “I have a hard time making friends. It’s hard for me to trust white women.”

Her issues with forming bonds of trust across racial lines started early. “I didn’t grow up an activist,” Evans said of her upbringing in a predominantly Black parish in Louisiana. “Race wasn’t talked about because we didn’t have to talk about it.”

Saulsberry, Evans and Daniels, though, all agreed about the dangers of so-called “colorblindness.” Daniels pointed out an example she used in her book: Rachel Dolezal, the white woman who masqueraded as a Black woman and eventually rose to the presidency of the local NAACP in Spokane, Wash.

“We’ve talked about race as a social construct, and folks want to claim things they’re not (racist),” Daniels said. “We’ve given them room to do that. They’re seeing some kind of escape-hatch from being a white woman.”

Daniels argued that an escape from whiteness should not be the answer for white women hoping to undo the damage of white supremacy. “It covers a lot of evil if you constantly have to be ‘nice,’” she asserted. “We must confront systems.”

‘My Body Becomes a Missile’

The role of white women in the American justice system is one such system that Daniels decried both in her book and at the panel discussion. White women’s tendency to call upon a legal system that is three times more likely to kill a Black man than a white man has often resulted in rampant injustice, the professor said.

“One point of my finger, and my body becomes a missile,” Daniels said.

Carolyn Bryant Donham’s testimony against Emmett Till, to whose memory Daniels dedicated her book, was one such weaponization of the white female body, she argued. A band of white men kidnapped, tortured and eventually killed Till following Donham’s attestation that the 14-year-old whistled at her before making a sexual comment in Money, Miss., in 1955. When Roy Bryant and J.W. Milam stood trial for the lynching of Till, Donham testified about Till’s supposed misconduct, thus cementing the men’s not-guilty verdicts.

Bryant and Milam would confess to the murder six months later in an interview with Look magazine. But many people believe Donham was lying in that testimony, even as the Federal Bureau of Investigation closed a probe into her role this month due to lack of evidence.

‘She Still Had a Voice and Used It’

Benjamin Saulsberry agreed with Daniels’ opinion that Donham weaponized the legal system that already disproportionately favored white men, but he argued that Carolyn Bryant Donham’s testimony is not as simple as it might seem at first glance.

“Lying to the feds (would be) a crime,” Saulsberry acknowledged. “But we don’t know who (originally) told Roy about what happened at Bryant Grocery. He confronted Carolyn, and there was a lack of accountability.”

Daniels admitted that there had been rampant allegations of abuse in the Bryant marriage, but she still believes that Carolyn Bryant Donham is the South’s most haunting example of the privileges encompassed in white womanhood. “She has agency,” Daniels replied. “She must take responsibility for what her actions caused, not just to (Till) and his family, but to his entire community.”

Evans also cited the 2010 murder of James Craig Anderson, whom a group of white teenagers beat to death before running him over in the parking lot of the Metro Inn near Interstate 20. “When asked why she did this, one of the white women said, ‘My family taught me to do this,’” Evans said of the hate crime.

Daniels said the contemporary echoes of a decades-old crime proves that the work of dismantling racial injustice is still as fresh and vital as ever, particularly for white women.

“It’s not the identity you claim,” Daniels concluded simply. “It’s about who claims you.”

“Nice White Ladies” is available via Amazon and the book’s publisher, Seal Press.