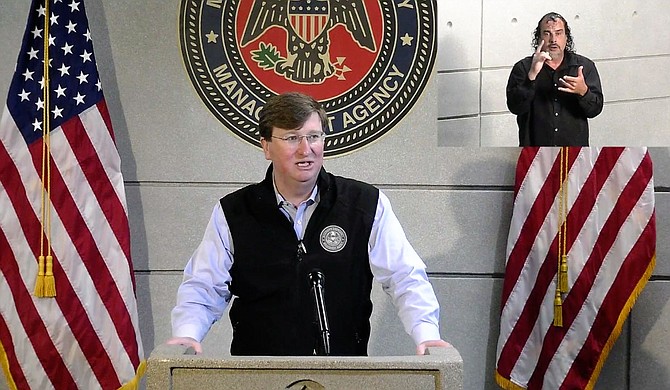 Mississippi Gov. Tate Reeves is extending a statewide mask mandate through the end of September, saying Monday he believes it is helping slow the spread of the new coronavirus. Photo courtesy State of Mississippi

JACKSON, Miss. (AP) — Mississippi Gov. Tate Reeves is extending a statewide mask mandate through the end of September, saying Monday he believes it is helping slow the spread of the new coronavirus.

The rule about wearing masks in public is part of an executive order the Republican governor issued Sunday. The order eased some limitations on businesses.

Retail stores and gyms may operate at 75% capacity, up from the previous limit of 50%. Gyms may remain open 24 hours a day.

“We have had a tremendous move towards progress in our state,” Reeves said Monday.

He said that Mississippi “for the first time in many, many, many months,” is seeing a seven-day average of new COVID-19 cases below 3,000.

“That is because of the efforts of the people of this state,” Reeves said.

The state Health Department said Monday that Mississippi, with a population of about 3 million, has had at least 90,018 reported cases and at least 2,706 deaths from COVID-19 as of Sunday evening. That’s an increase of 145 confirmed cases and nine deaths from numbers reported the day before; the nine deaths occurred between Aug. 26 and Sept. 4, and information from death certificates arrived later.

The true number of virus infections is thought to be far higher because many people have not been tested and studies suggest people can be infected without feeling sick. The virus causes mild or moderate symptoms for most but can be more severe or fatal for some, especially older adults and those with underlying health conditions.