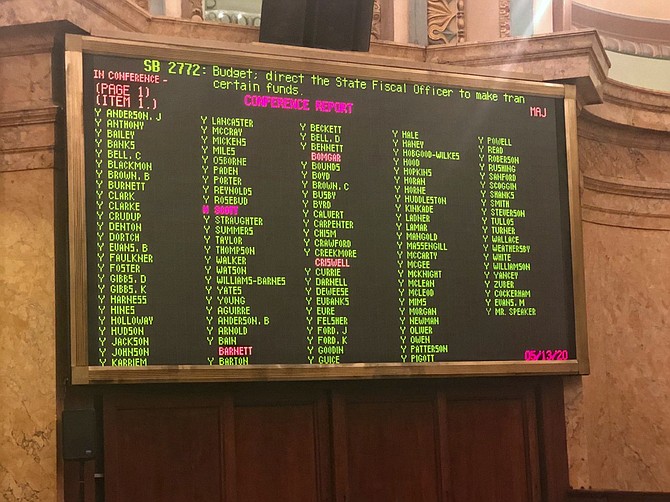 The Mississippi Legislature passed a $300-million stimulus bill directed at Mississippi’s small businesses on Wednesday night, putting a declarative end to the debate over who would appropriate $1.25 billion in CARES Act funds, and how to administer the money. In a sprawling session that lasted well into the night, both parties joined to pass a bill three times as expansive as the $100 million initially suggested in the Senate committee.

The appropriation, an amendment to Senate Bill 2772, the bill at the heart of last week’s legislative-executive schism, creates two new funds. The Mississippi COVID-19 Relief Payment Fund will receive $60 million for immediate relief to businesses.

Any businesses that experienced “required or voluntary closures related to COVID-19” will receive $2,000 from that fund as a necessary expense without being subject to a grant application process. Legislative leadership has estimated around 30,000 businesses in Mississippi qualify for those funds.

The bill transfers an additional $240 million to the Back to Business Mississippi Grant Fund. To access these dollars, businesses must apply through the Mississippi Development Authority for a base payment of $1,500, plus either $500 per full-time employee or payment based on itemized expenses. The maximum available to each business is $25,000.

The bill also transfers $900 million into the Legislative Budget Contingency Fund for later use. The Department of Finance and Administration may escalate $50 million to pay for expenses state agencies incur due to COVID-19.

After the bill cleared the Legislature this morning, Lt. Gov. Delbert Hosemann and House Speaker Philip Gunn addressed the state from the Capitol rotunda to explain the bill. “We purposefully set forth the first 21 days for people who did not get (Paycheck Protection Program funds) … Eligible expenses are defined as mortgage, rent, payroll for two months,” Hosemann stressed, repeating warnings that lawmakers do not intend the money to make up for lost revenue.

The bill sets aside $900,000 for MDA to manage the grant program. The U.S. Department of Treasury’s Inspector General and the Mississippi State Auditor will have the authority to audit grant use—seemingly settling the question of the role and recompense of a third-party administrator in the appropriations process.

Democrats in the House and Senate worked closely with the Republican majority in the conference process, drawing praise from across the aisle for their cooperation.

Senate Minority Leader Derrick Simmons, D-Greenville, said in an interview with the Jackson Free Press that it opened a new horizon for legislative cooperation. “I’m very excited about what we accomplished in the Legislature as a representation of the Mississippi we can become. Blacks, whites, Democrats and Republicans came together to support Mississippians,” he said.

“The real heroes here are the House members and senators who voted to do this. And I want to give a special thanks to them,” House Speaker Gunn said at his morning press conference. “This is just what we’re doing today. Nothing prevents us from coming back 10 days from now when we return and putting more money in if we need to.”

Hosemann celebrated the bipartisan accomplishment at today’s press event, noting that the governor and his team were involved in the process, as previously agreed.

“On May 4 we got the final regulations—some 10 days ago. We are one of the first states in the country to allocate this money,” Hosemann said at the press briefing.

“I was impressed last night late by one of the conversations (with a) House member,” Hosemann added. “He came to me and said, ‘I think this is a recipe for the future, because there was no one in there with an agenda except for the people of Mississippi.’”

Read the JFP’s coverage of COVID-19 at jacksonfreepress.com/covid19. Get more details on preventive measures here. Read about announced closings and delays in Mississippi here. Read MEMA’s advice for a COVID-19 preparedness kit here.

Email information about closings and other vital related logistical details to dustin@jacksonfreepress.com.

Email state reporter Nick Judin, who is covering COVID-19 in Mississippi, at nick@jacksonfreepress.com and follow him on Twitter at @nickjudin.