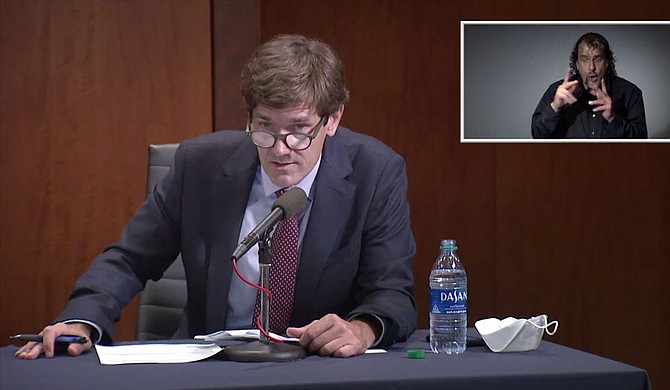 State Health Officer Dr. Thomas Dobbs warns that “crisis care reminiscent of war zones is approaching. “We're (talking) Army-style barracks sort of scenarios. … We're talking about getting care in a tent ... having to make a decision about who gets a ventilator and who doesn’t.” Photo courtesy State of Mississippi

A week of uncontrolled spread of COVID-19 has elapsed in Mississippi, with case numbers swelling to unprecedented numbers at the same time that the state’s hospital system reports the unbearable stress of earlier infections.

Today, the Mississippi State Department of Health reports 982 new cases of COVID-19, following yesterday’s tally of 1,547. The day before, that number was 1,635.

The all-time highs raise the stakes even higher after a week of 1,000-plus daily cases. Currently, the seven-day rolling average of new cases is 1,179. The most recent case positivity rate, calculated based on new test totals and new cases reported between July 13 and July 21, is 18.1%, well over three times the rate the World Health Organization allows for safe reopenings.

These numbers bring the total confirmed cases of COVID-19 in the state to 47,071 and deaths to 1,423. Eighteen percent—8,504 of these cases—are from the past seven days alone.

Gov. Tate Reeves and State Health Officer Dr. Thomas Dobbs, at their COVID-19 press conference yesterday, painted a dire picture of what medical care may look like if COVID-19 continues to spread at its current rate. The men went above and beyond their typical warnings to stress in excruciating detail what will happen to Mississippi if the unmitigated spread continues.

“We're (talking) Army barracks sort of scenarios. We're talking about not being able to get the kind of doctor that you need. We're talking about getting care in a tent, those sorts of things. … Having to make a decision about who gets a ventilator and who doesn’t,” Dobbs said.

Out of 272 intensive-care beds for Region Five, which includes the entire Jackson metro area, two were available as of Wednesday.

Insufficient beds and equipment are only part of the problem that can arise from an overburdened health-care system. Finding staff to care for patients and operate equipment like ventilators can pose an even bigger hurdle. “You want a respiratory therapist actually operating that machine for you. There's a limited number. There's only so many,” Reeves said.

“Crisis care means that your loved one is going to be in a big room with a hundred other people, and you can't go see them,” Dobbs said. “We have 293 COVID patients in our intensive care; 40% of all intensive care patients are coronavirus. That's absolutely astounding. Just a week or so ago it was 30%. I don't know how far we can go until we're absolutely going to be outside of standards of care and going into crisis care because we just can't take care of the burden.”

New hospitalization data were not available by press time.

School openings, planned for only weeks from now, are seriously in question. Yesterday, as state officials spoke about the worsening crisis, Madison County School District announced that it would delay the start of its school year to Sep 3. Hinds and Rankin counties are still scheduled to begin their school year in August.

Dobbs cautiously supported a return to in-person schooling, while acknowledging the unavoidable risk. “From a pure infection control perspective, it makes perfect sense to not open schools at all,” he said.