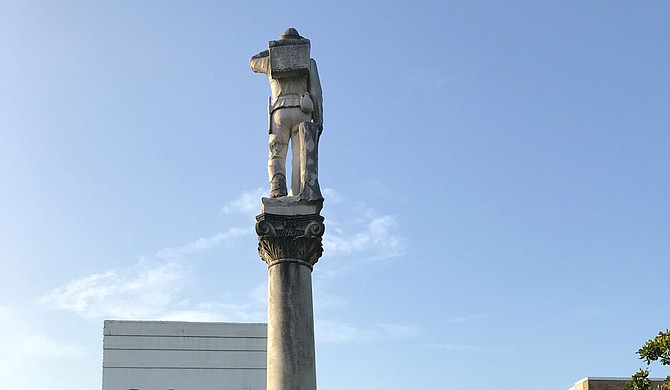 Neshoba County’s rebel soldier stares at a law office and other businesses from his perch on the courthouse lawn. It’s time for him to go. Photo by Donna Ladd

As a Neshoba County kid, I grew up in the shadows of the Confederate statue that loomed in front of the courthouse. When we'd go to town on Saturdays, I'd pass the rebel soldier on my way to JCPenney to put clothes on layaway or, on his other side, to Hamill Drugstore for my Coke and pack of Nabs.

I'd walk around the "rebel soldier" (as everyone called him) on the way into the tiny public library just inside the courthouse, but I never stopped to read his statue engravings. He was just there.

As a young teenager, I was acutely aware of racism and the flinging of the n-word, as well as the horrific bigotry toward Choctaws. When I was 14, I learned of the murders of civil-rights workers James Chaney, Andrew Goodman and Michael Schwerner for the first time, although it happened when I was 3 and at the hands of men we knew. That included Cecil Price who fixed my birthstone ring at the tiny City Jewelry next to Hamill's. I learned about the murders in a CBS TV movie, not in school.

Neshoba Central taught us nothing about racism, lynchings or the Civil Rights Movement, at least not intentionally or officially. I did witness vicious paddlings of Black boys for lesser offenses than white kids committed. And my wonderful (white) high-school principal confided in me about the racist school board when I was in high school—for a while, they didn't even want five Black basketball players on the court at one time, he told him, holding his forehead. He was my earliest confidential source, teaching me much, may he rest in peace.

Our textbooks, and many teachers, glorified the Old South, pretended that slavery was helpful to the enslaved, that the "War Between the States" was glorious, and that carpetbaggers and scalawags ruined Reconstruction. They sure taught nothing critical of the South, even as many white people around me were continuing to make the former Confederacy look bad daily.

When I learned about the murders, my 14-year-old appetite to study real history was suddenly voracious. I angrily wondered what else they hadn't told me.

Facts about Mississippi, Secession, Slavery and the Confederacy

The JFP’s archives of historically factual stories about slavery, secession and the Civil War in Mississippi, with lots of links to primary documents.

Still, I didn't yet get that the statue was erected as a symbol of white supremacy by organizations and people who wanted to revise the war the South had started to maintain and extend slavery to new states. These same people enacted horrific Jim Crow laws to disenfranchise and mire Black Mississippians into poverty and powerlessness to protect their own greed and control, and many of their kids would inherit their beliefs.

The statue was part of my upbringing, as was the sheet music for "Dixie" that our high-school band played at the Neshoba County Fair with old white men standing at attention saluting. It was all part of the indoctrination to convince younger minds these were symbols of pride—the symbols were there to keep us ignorant, complacent and racist, willing to keep the old systems in place and, no doubt, to show Black people who was still boss.

I was excited when I came back to Philadelphia in 2001 to research my master's project, finding the generic soldier statue off his pedestal and sitting inside the courthouse door, missing an arm. Maybe they won't put him back up, I hoped, knowing by then what he repped. But doubt set in when I interviewed a young white attorney in his firm in the old hoity-toity dress shop the statue stared at, and he had rebel flags everywhere, on everything. He was proud that you had to walk on one flag built into his floor; I was proud to step on it.

Of course, Neshoba County eventually did put him back on his high perch, rejecting the opportunity to embrace honesty and compassion.

On Monday, July 20, the Neshoba County Board of Supervisors voted 4-to-1, along race lines, to keep the now-restored rebel soldier on his pedestal after the local Black Empowerment Organization, formed there after George Floyd's horrific death and inspired by protesters in the tiny town of Petal, Miss., called for its removal. The four white men are more or less my age, and were probably taught the same lies and distortions growing up, as were their prize constituents. In one way or the other, they are still pledging fealty to a treasonous fight against the United States, fought to prevent freedom and equality for all.

Those supervisors don't yet know what they don't know, or they don't care because they still believe in what their ancestors told them, and maybe they want to paper over their own people's participation in slavery, the Civil War and white supremacy—which I refuse to do. It was what it was: horrific. Either way, it was a vote for white supremacy, which I'm sure they would all deny vehemently because those propping up white supremacy in one way or another nearly always do.

They are egged on by long-time newspaper owner Jim Prince III, who throws around the nonsensical phrase "cultural marxist" toward anyone who challenges the way Mississippi does things still, or hasn't changed. He had a glory moment once on race, participating in the Philadelphia Coalition that called for a modicum of justice finally, leading to the conviction of 1964 lynch-mob boss Edgar Ray Killen right in that courthouse, yards behind the statue.

That coalition warmed my heart as a Neshoba County native, and the conviction was glorious to watch—I covered the trial—but it's not like defeating racism is a one-and-done act, especially when it's over 41-year-old murders. What a good newspaper owner would do is lead deep journalism into the effects of the Confederates' apartheid laws and racist violence long past Appomattox. What are the embedded inequities? Solutions? Instead, Prince bashes a minor boy who protested in front of Philadelphia High School for better education because a word was misspelled on his sign.

In their own words, Confederate leaders explain secession, the Civil War and their views about black people.

Prince claimed online, in a post since removed, that "our community forever changed the trajectory of race relations in Mississippi"  after the Coalition's call for justice in '94, adding that "Marxist" Black Lives Matter folks oppose the "nuclear family." His fellow member of the Mississippi Press Association, Laurel Leader Call newspaper publisher Jim Cegielski (a white man apparently from New Jersey) is writing similar poison editorials about protesters, like one called "The war against white people" from late June.

A Neshoba Democrat editorial repeated Prince's drumbeat of hyperbole about Marxism, reminding me of the 1964 editions I read on microfilm in the county library when I was 14, calling civil-rights activists communists and agitators and then proclaiming their murders to be a "HOAX" huge on the front page. And, of course, this 2020 editorial doesn't make a lick of sense: "Whitewashing history by pulling down monuments is a highly damaging Marxist notion sweeping America in the name of black lives matter. Yes, black lives do matter, but so do all lives."

So moving a statue that glorifies a white-supremacist rebellion aimed at ensuring that slavery never ends to a museum with historic contextualization is "whitewashing"? Interesting choice of words there, considering that was exactly the purpose of these memorials—to whitewash Confederate history that was anything but glorious.

Clearly, Jim, Mississippi's race trajectory has not changed much with these kinds of words coming from white Mississippi newspaper publishers in 2020 or when 42% of Black people in the town you serve live below the poverty line (18% for whites), and public-education facilities and resources vary strongly in two schools 1.5 miles apart.

The "Black Lives Matter" movement sweeping the nation is not a monolithic, scary organization—it's stronger than that, an extremely diverse coalition working to do what should have been done decades ago, from removing racist symbols to looking closely at solutions for embedded inequities compounded over time. Those inequities hurt us all.

So gentlemen, stop it with the scare tactics and get better educated about what's really happening. What's loosely called "BLM" is now a vital shift in thinking that challenges the legacies of systemic and structural racism and inequity, which is symbolized by four white men refusing to move a figure of Black oppression off a courthouse lawn. Hey, white dudes did the same thing in the intellectual oasis of Oxford, Miss., so it's not just Neshoba grasping its racist past.

But my hometown, with our deep reservoirs of violent pain and overly simplistic reputation of being the most hateful place in the U.S., should seize this opportunity to lead, just as people there did back in 1994.

Otherwise, that overdue conviction was a fleeting victory.