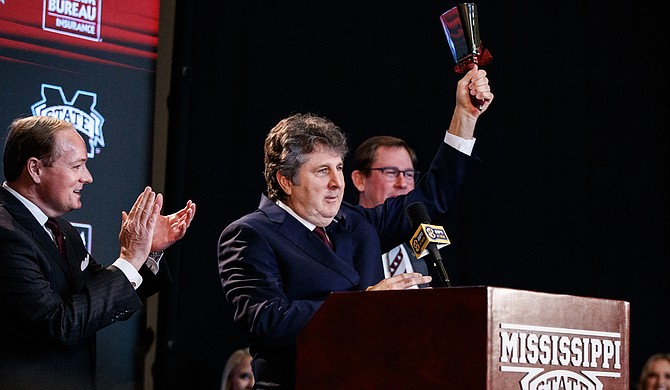 New Mississippi State University head coach Mike Leach will certainly be a fun one to watch during press conferences. Leach has been known to discuss topics such as vikings versus pirates, his hope that there is a bigfoot, and his thoughts on if we are alone in the universe.

While at Washington State University, Leach taught a class with former Washington state senator Mike Baumgarther titled "Insurgent Warfare and Football Strategies." Teaching a class is not something you typically see a college football head coach do at a Division I university.

Leach has been known to call out his players when they have underperformed on the field. During this past season at Washington State, he called his players fat, dumb, happy and entitled. Having a coach that will publicly criticize college players appears to be a rarity.

In case the previous paragraphs did not make it clear, Leach is not your typical coach. He is actually one of the few college head coaches with a law degree. Graduating from Brigham Young University with a bachelor's degree in 1983, he went on to earn his master's degree from U.S. Sports Academy and his juris doctorate from Pepperdine University.

In 10 seasons at Texas Tech, Leach never finished with a losing record, he finished ranked in the top 25 at the end of his fifth season, and he helped the Red Raiders reach a bowl game each season he was the head coach.

Things turned sour for Leach at Texas Tech when Adam Jones, son of former Southern Methodist University and NFL player Craig James, accused him of abuse. Leach ended up being fired after a public spat toward the end of the 2009 season.

Leach left Texas Tech after coaching 127 games while winning 84 games and losing 43 games. Leach went 5-4 in bowl games but was fired before coaching his team in a bowl game after the 2009 season.

The next stop for Leach was Washington State after he was hired before the 2012 season. Things started rough as he finished with a losing record in his first three seasons.

He turned things around in 2015 as the Cougars went 9-4 and won the Sun Bowl to end the season. Leach followed it up with eight wins in 2016 and nine wins in 2017, but Washington State lost a bowl game to end both seasons.

Joe Moorhead ended up being fired at Mississippi State, and the Bulldogs snagged Leach to replace him. Leach, like Moorhead, will feel the lingering shadow of former MSU coach Dan Mullen if he struggles early.

No matter how the Leach era at MSU turns out, with him coaching the Bulldogs and Lane Kiffin at the University of Mississippi, college football in Mississippi in the SEC just became must-see.