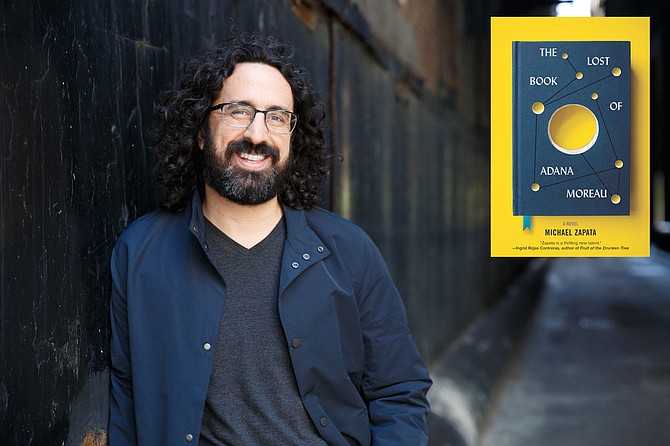 Michael Zapata uses dual narrative to explore the application of history in his new book. Photo by Michelle Kaffko

There's no greater joy than falling into a piece of metafiction—fiction that is about fiction—with little to no pretense. A consistently rising trend within literary fiction, these works tempt the veil of reality, testing the boundary of allegorical allusion. I'm constantly drawn to incredibly surreal fiction because of its frank writing, presenting real-life controversies in very unconventional ways.

That said, to call "The Lost Book of Adana Moreau" metafiction wouldn't be exactly accurate because it manages a blending of speculative discussions, meta writing, surreal situations and almost-fantastical realism that, by all means, should result in a very messy manuscript.

However, Michael Zapata is clearly no stranger to contemporary high concept. In the span of a very tight novel, he bounces through parallel Earths with the mission of preserving various fictional histories.

This novel is told through a dual narrative that takes place both throughout time and within fictional worlds. One such modern-day point of view comes from Saul Drower, who discovers an unpublished manuscript of the titular, and relatively unknown, Adana Moreau.

Tasked by his recently deceased grandfather to return the manuscript to Adana's son, Maxwell Moreau, Saul treks through the ruined streets of a post-Katrina New Orleans to preserve the memories of an author lost to history.

Our other voice comes from a mid-1900s Maxwell Moreau as he goes through his personal bildungsroman—a journey through the protagonist's formative years—alongside Saul's narrative. We learn of Adana's legacy as an immigrant, mother and author, publishing her instant-hit, science-fiction novel "The Lost City" and writing the unpublished "Model Earth" just before passing. Beginning even before his birth, Maxwell's story takes the reader through various moments of his early years, fleshing out New Orleans and the South through the lens of a pirate's son.

I was enthralled by Maxwell's and Saul's fascination with infinite parallel dimensions, the science in which Maxwell specializes while a professor at a university in Chile. Combining this traditionally science-fiction idea with the contemporary notion of "history" propels the novel to untampered philosophical heights. Zapata essentially erases "actual" history and presents alternate timelines. By doing so, he offers reflections on the purpose of recording history if infinite universes, and therefore infinite possibilities, exist. In effect, he is questioning whether or not we are experiencing "actual" history on Earth as we know it.

These sort of existential ponderences only serve to heighten the extremity of Saul's central task as he struggles to quite literally preserve and pass on the memories and history of a woman shoved aside within the realm of science-fiction writing. Like his late historian grandfather, Saul articulates that one's memories construct the entirety of nations, whether they be genuine or fictitious, and a true death only follows the end of one's memories. Zapata demonstrates this poetic matter in a scene where a German immigrant, being born before the unification of Germany, insists that she is a native of the Kingdom of Prussia. Despite the eventual rise of a Frankenstein culture from the destruction and re-pasting of another, the long-dead immigrant's memories play in Saul's grandfather's cassettes.

Mid-way through, Zapata cements his thoughts on these rather complex notions by offering his own answer to the question that he has presented, ushering the novel into its initial building moment that makes us latch on to Saul's unlikely quest. Saul's grandfather's words ring out: "History, like fiction, was illusory, if not an outright line, but we exist because of it and it existed because of us." His grandfather's memory in-hand, Saul is determined to make sure that this ultimately forgotten writer be remembered by not only her son but the world.

Zapata does not hesitate to give a knowing wink through his characters. Much like his protagonist's grandfather's published collections of historic writings, Zapata's own memory, his personal fictional history, will be preserved with this novel. Effortlessly twining reality's conflicts and societal issues with a mind-bending concept, he leaves us wondering if the world that we're experiencing is, in fact, an "actual" history.