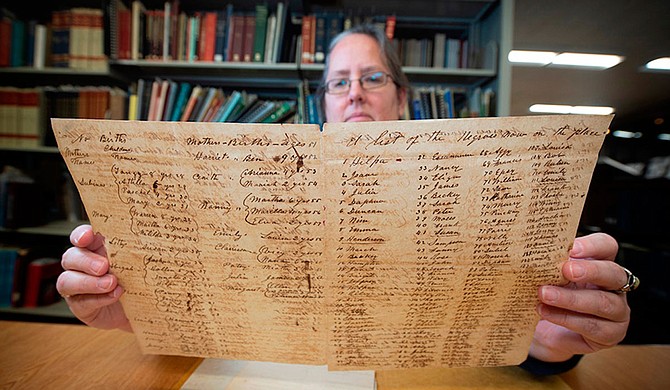 MSU Libraries Coordinator of Manuscripts Jennifer McGillan, program director for the Lantern Project, evaluates one of many historical documents for prospective digitization. If selected, a copy of the record will be made available to the public for free upon project completion. Photo by Megan Bean

The project is based on a similar one at the Virginia Museum of History and Culture called "Unknown No Longer," a release from MSU says. The National Historic Publications and Records Committee, a branch of the National Archives, funded the Lantern Project with a $340,424 grant.

When completed, the archive will be a fully text-searchable, indexed collection of digital images of original documents, including individuals' names and detailed physical descriptions. The database will use records that slave owners and the 19th century legal system used to track enslaved persons—including inventories, bills of sale, and probate and other court records—to trace victims' movements and reconstruct family trees, the release says.

MSU Libraries will host the main database, and participating institutions will store copies of digital images and metadata where possible and distribute them to state digital libraries and the Digital Library of American Slavery at the University of North Carolina-Greensboro.

For more information on the Lantern Project, call 662-325-3071, email jmcgillan@library.msstate.edu or visit http://lib.msstate.edu/.

Sonic Boom of the South Showing at CBDNA Southern Conference

The College Band Directors National Association recently selected a recording of the performance that Jackson State University's marching band, the Sonic Boom of the South, put on during halftime at a New Orleans Saints vs. Atlanta Falcons game for showing at the CBDNA Southern Conference from Feb. 20-22 at Northwestern State University in Natchitoches, La.

The showing will be JSU's first time participating in the conference, which first began in 1941. JSU is also the only historically black college selected for the conference this year, a release from the university says.

On Tuesday, Feb. 25, the Jackson City Council will honor Roderick Little, JSU's band director and a graduate of Lanier High School, for his service with the Jackson Public School system and his accomplishments at JSU as both a music instructor and band director.

Online military resource guide militaryfriendly.com recently selected the University of Southern Mississippi as a Top 10 "Military Friendly" school for 2020 to 2021.

The University recently established a formal partnership with the United States Air Force's Community College of the Air Force General Education Mobile program. The CCA is a Southern Association of Colleges and Schools-accredited community college that serves the educational needs of U.S. Air Force members.

USM also expanded its services at Camp Shelby in Hattiesburg through the Soldier and Family Assistance Center (1303 Jackson Road, Hattiesburg). USM will provide routine education benefit counseling to service members and their families each Wednesday from 10 a.m. to 2 p.m.

The University has also partnered with the U.S. Army to assist soldiers who are pursuing a bachelor's either before or while attending the United States Army Sergeants Major Academy in Fort Bliss, Texas.

The 2020-2021 Military Friendly Schools list will appear in the May 2020 issue of G.I. Jobs magazine. The list is also available online at militaryfriendly.com.