OPINION: The Black Vote Is Not For Sale | Jackson Free Press | Jackson, MS

OPINION: The Black Vote Is Not For Sale 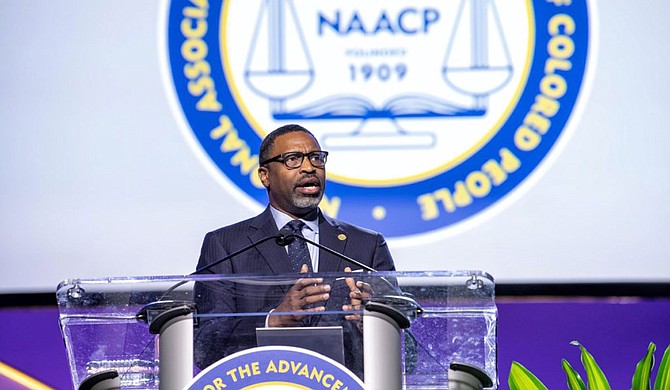 For years, Donald Trump and his allies have continued to abuse the power of his presidency, bending rules and breaking laws for his own personal and political benefit.

From abusing his high office to enlisting a foreign power in corrupting democratic elections, to using Alice Marie Johnson's case in a Super Bowl ad to paint himself as a champion of criminal-justice reform, and spewing false narratives to the American public about the State of our Union in a shameful display of political theater, Trump's audacious tactics know no bounds. And as we inch closer to the 2020 election, his latest scheme proves just how far he is willing to go.

Just last week, news broke of Trump supporters hosting a $25,000 cash giveaway event in Cleveland in an egregious attempt to buy black voters and garner their support. While the Trump administration has worked to silence our vote with ridiculous voter-ID laws, this shameful attempt to buy votes from black Americans poses yet another imminent threat to our communities as we prepare to vote in one of the most important presidential elections of our lifetime.

With more events like this scheduled to take place in the lead-up to the presidential election, such deceitful tactics not only demonstrate the arrant disrespect that Trump and his allies have for the black community, but diminish and undervalue our voices and interests in the political arena.

We know—and Trump knows—that our vote holds immense power and will have a direct impact on who gets voted into the White House come November. As we've seen from the incredible black voter turnout in the midterm and 2019 elections, African Americans are not only the most critical voting bloc, but also the most powerful when we participate actively in the electoral process.

There is no amount of money or price that can be paid for communities of color to receive access to clean drinking water, adequate education and impartial policing. And since Trump's presidency, we have endured these harsh realities that have come to life in full force as we've seen a determined effort from the administration to neglect our needs and interests.

As we approach the 2020 election, we must ensure issues affecting our communities—and our livelihoods—are brought to the table and that we have a real voice in moving this country forward. Our vote provides the foundational basis for that.

Because the integrity of the 2020 election is at risk, we cannot afford to wait any longer to protect our democracy. If America is to become a democracy reflective of its ideals of liberty, opportunity and justice for all, it cannot do so without embracing, engaging, and valuing black voters and voters of color.

As the NAACP moves forward in its efforts to empower the black community through increased voter participation, our ultimate aim is to continuously elect greater numbers of representatives who understand the needs of our communities and are committed to making the American dream accessible for everyone, regardless of race or ethnicity.

Derrick Johnson is the president and CEO of the NAACP, America's largest civil rights organization. Follow him on Twitter @DerrickNAACP.

This essay does not necessarily reflect the views of the Jackson Free Press.