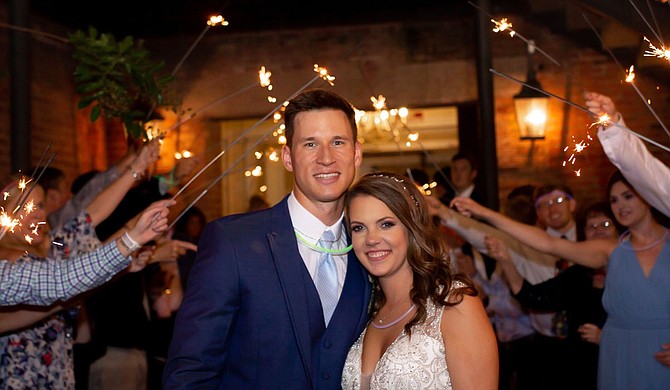 Pearl native and resident Casey Spell has never felt too busy to take on another activity or responsibility, as he is presently working his way through medical school while also co-owning and managing H&S Roofing and Home Repair alongside his high-school friend Chris Hare.

In 2010, Spell graduated as valedictorian from Pearl High School, where he played soccer and was on the school's drumline. He then enrolled in Millsaps College, earning his bachelor's degree in biochemistry in 2014. Spell later taught at his alma mater Pearl High School for two years before starting medical school at the University of Mississippi School of Medicine in August 2018.

"Medical school is something I've wanted to do since probably eighth grade, but I took some time off after college to explore whether I wanted to live the working life," he says.

Spell attends medical school on an Army scholarship, specifically the Health Professions Scholarship Program, which means he will do his residency at a military hospital and then be committed to four more years of military service.

"I was used to getting paid already, and I didn't want to just drive myself into debt," Spell says. His father had been in the Army himself, so he figured he would follow in his "old man's footsteps," he says.

On his own time, Spell enjoys listening to audiobooks on personal development, money, and finance while driving between school and home—at twice their normal speed. "I usually don't listen to the radio. I'm usually listening to books," he says. "It is the only time I have to consume information outside of school."

At the beginning of his second semester of medical school in early 2019, Spell and Hare, founded H&S Roofing and Home Repair. Hare had been working in the home repair and property preservation sector for eight years and wanted to go out on his own.

"Chris knew that I knew some business stuff, so we sat down and got something started, and it's been going ever since," Spell says. "I take care of the finances and taxes and the business side of the company, and Chris is all on the labor side, and he basically goes out and does all of the work."

Spell met his wife, Anna, in January 2018. "I guess you can say we fell in love," he says. They married in July 2019 and have a baby boy on the way, whom they will name Holden. The couple attends Park Place Baptist Church in Pearl and likes to occasionally go out for a steak or stay in and watch "Grey's Anatomy" together.