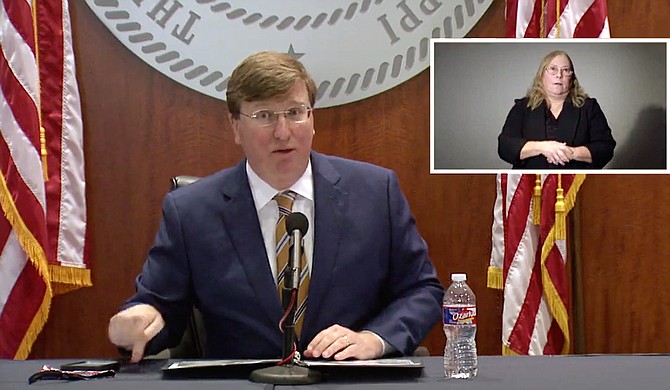 Mississippi saw 2,457 new cases of COVID-19 on Tuesday, Dec. 1, 2020, a staggering new single-day peak. The same day, Gov. Tate Reeves falsely claimed the state was not in a new peak, offering only additional piecemeal restrictions to stem the tide of the virus. Photo courtesy State of Mississippi

Mississippi has shattered its all-time record for new COVID-19 cases in a single day, with the Mississippi State Health Department reporting 2,457 cases this morning, only one day after Gov. Tate Reeves attempted to fact-check this reporter for asserting that the state was in the most significant spike of the pandemic so far.

The state’s COVID-19 hospitalizations and case reports have both exceeded the all-time highs previously set in summer, all based on transmission that took place before the nationwide family gatherings on Thanksgiving. Now, with the state firmly in its newest peak, state health leadership is calling for a dedication to public health at every level of society. 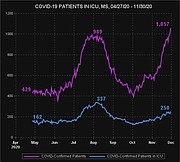 “It’s time for leaders to lead,” State Health Officer Dr. Thomas Dobbs said at a late-morning virtual press event, adding that “12 major hospitals have zero (intensive-care unit) beds … We are receiving messages that patients are being denied transfers to higher levels of care.”

Those hospitalizations are reflected in the latest report from the Mississippi State Department of Health, which showed total confirmed COVID-19 hospitalizations in the state’s hospital system at 1,057. The previous peak, in late July, reached only 989.

Unlike August, there is no sign that transmission will begin to taper off. Holiday lags in reporting have done little to blunt the massive influx of new cases. Today’s report of 2,457 new cases of COVID-19 follow all-time weekend highs of up to 1,845 cases, reported Sunday. This brings the rolling seven-day average to 1,605, an all-time peak and hundreds of cases above the highest summer average.

But Gov. Tate Reeves rejected the data showing the severity of the crisis when it was presented to him. “When you say that we are currently exceeding our peak, that’s fundamentally inaccurate. That’s just not true. That’s false, in fact,” he told the Jackson Free Press Tuesday.

The governor was wrong. Mississippi already exceeded its all-time seven-day average with Monday’s report. Still, Reeves refused to issue a statewide mask mandate, merely adding more counties to the mask order list, while declining to comment on a letter from four public health agencies pleading for a statewide order.

The White House Coronavirus Task Force estimates Mississippi’s COVID-19 positivity rate—meaning the percentage of tests that detect the disease—has risen to 14%. Dr. Paul Byers, state epidemiologist, said MSDH’s own calculations put that number between 13% and 16%. Both measures are grim. The World Health Organization urged governments not to reopen their economies until their positivity rates had dropped below 5%.

A State of Uncontrolled Spread

As it stands, Mississippi is in a state of uncontrolled spread. Byers shared reports from just before the Thanksgiving break that showed 60 schools forced into virtual learning due to multiple outbreaks on campus. This is not including the numerous counties that have transitioned to virtual learning entirely due to increased community transmission in the surrounding area.

Dobbs noted a decrease in the relative number of ICU patients considering the size of the surge—though seasonal illness means total ICU capacity is still virtually gone—and chalked it up to a number of factors. “The virus is not less dangerous,” Dobbs asserted, explaining that a younger demographic, better use of steroids and a reluctance to intubate patients (place them on a breathing tube) was leaving many of the infected outside ICUs.

But Thanksgiving gatherings are likely to change that calculus, with the inevitable cycle of transmission shifting from young Mississippians to their parents and grandparents, far more susceptible to extreme cases of the virus. "Numerous times in this last week I have diagnosed someone with coronavirus who got it from their children- often asymptomatic,” Dobbs said. The state health officer personally tests between “20 to 30” individuals a week to help reinforce the state’s testing effort.

On Twitter today, Dr. LouAnn Woodward, vice chancellor for health affairs and dean of the School of Medicine at the University of Mississippi Medical Center, pleaded for compliance on behalf of the health-care providers at her hospital.