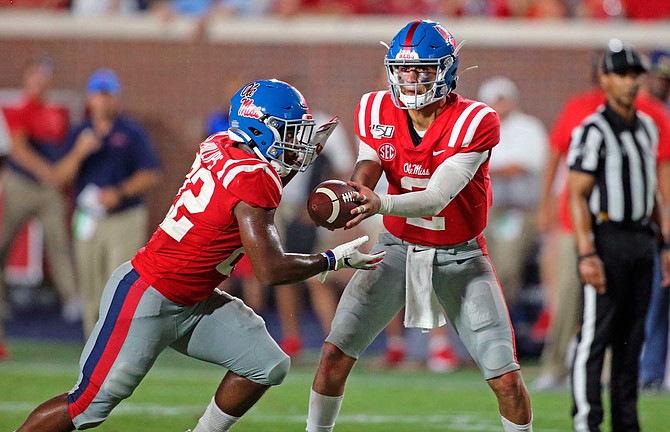 Fans had plenty of optimism for the University of Mississippi offense heading into the 2019 season. Expectations grew in the 2019 Grove Bowl as fans saw their first glimpse of new offensive coordinator Rich Rodriguez and quarterback Matt Corral.

In the spring game, Corral passed for 240 yards on 22 completions out of 37 attempts. He threw for a touchdown and an interception with four yards rushing on nine carries.

During the opening game of the season against the University of Memphis, Mississippi's offense didn't impress much. The Rebels offense managed just 173 yards in total offense for the entire 60-minute game.

Corral managed just 93 passing yards on nine completions. He attempted 19 passes and failed to throw for a touchdown. He then threw an interception and was sacked for a safety in the fourth quarter, which ended up sealing the win for the Tigers.

Memphis shocked the Rebels in a 15-10 victory. The opening game loss hurt the Rebels' bowl hopes and made the second game of the season against the University of Arkansas a must-win game.

The redshirt freshman quarterback had a breakthrough game against the Razorbacks. Corral completed 16 of his 24 pass attempts for 246 yards with two touchdowns and no interceptions.

He added another 46 yards on 10 carries with his legs. Corral's solid play helped UM earn a 31-17 win over Arkansas for the first victory of the season and the first one in SEC play.

The Ventura, Calif., native set new career highs for passing yards, completions, attempts and rushing attempts. It was the second time in his career he has thrown for multiple touchdowns during a game.

Because of his play, SEC named Corral the Freshman of the Week. In two games this season, he has attempted 43 passes and completed 25 with two touchdowns and one interception. In his two starts, he is completing 58.1 percent of his passes.

Corral attended Oaks Christian School in Westlake Village, Calif., and then transferred to Long Beach Polytechnic High School in Long Beach, Calif. At Long Beach, he was a U.S. Army All-America selection and rated a four-star prospect. As a four-year starter at both schools, he amassed 11,000 yards and 123 touchdowns. During his senior year, he threw for 2,495 yards and 29 touchdowns. He represented the West team in 2018 U.S. Army All-American Bowl.

In the 2018 season, the Rebels took advantage of a new NCAA rule where freshman players can appear in up to four games and still get redshirted. Corral played in four games last season, and completed 16 of his 22 pass attempts for 239 yards with two touchdowns and one interception. He rushed 13 times for 89 yards and two touchdowns.

His best game of the 2018 season came against the University of Louisiana at Monroe. In that game he threw for 143 yards and was a perfect 10-for-10 in passing with his first multiple passing touchdown game.

Corral and the Rebels will try to start a winning streak this weekend against Southeastern Louisiana University. UM will host the Lions in Oxford, Miss., with the kickoff scheduled for 3 p.m. and television viewing for the SEC Network Alternative.