Chris Wesley Moore Talks 'A Stranger Among the Living' 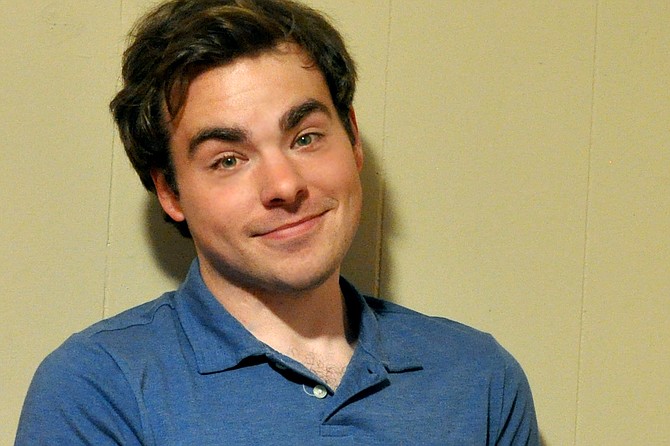 While growing up, Chris Wesley Moore developed a passion for storytelling, largely sparked by the multitude of movies he watched during his youth. This appreciation for movies led Moore to participate in film club while in St. Joseph Catholic School, where he graduated in 2008, and later attend the University of North Carolina School of Arts, where he earned his bachelor's degree in screenwriting in 2012. After founding CWM Entertainment in 2015, he began producing his own films. His latest movie, a supernatural thriller titled "A Stranger Among the Living," premieres on Thursday, Sept. 12, at Malco Grandview Cinema. On Wednesday, Aug. 28, Moore spoke with the Jackson Free Press about the movie.

How did you get into filmmaking?

I always liked to tell stories, ever since I was a kid. I would do stuff like play in my room with action figures and concoct these ridiculous stories. That started to build.

I had always watched movies since I was a kid. My grandmother (Dorothy Blair) had this huge collection of tapes—she would tape everything that was on—so learned a lot from her.

There was a video store that I went to a lot as a kid called Video Library. That was basically my first film school in a lot of ways. I would pretty much try to rent anything that I could, and that taught me so much. I learned what kind of stories I liked to tell.

... I was always trying to make films since I was about 10. I would take my family's camcorder, and I would get my friends together, and we would make these ridiculous movies. I mean, they were just terrible, but we thought they were just the best in the world—but of course we were so young. So I was making stuff from about 10 to 18 before I went to film school.

Tell me about the film.

I got this idea sometime around college. I had this dream that just came to me out of the blue, and I remember waking up and thinking, "Oh my god, that would make a great scene in a film." But I didn't really know what to do with it, because most of my films are realistic-ish. So there wasn't really a place for random dreams and stuff, but I concocted this story to go around it where this dream would start the film, and what it would be is basically a premonition or a warning of things to come. So if you see the film, there's lots of things in the first 10 minutes that don't really make a lot of sense until the film comes to an end, and then everything in the dream comes together by the end.

So once I had that idea, I came up with the story of this teacher who has this dream. And he basically is so disturbed by this that he doesn't stay at work the next day. And by doing that, he avoids this massacre. After that, he realizes that maybe this dream was trying to tell him something and that he should have been there. ... These minions of death are trying to bring him to the other side, like he was supposed to die. And I thought that would be fun because I had never done a sort of supernatural thing.

What was the dream about?

I was in the car with a group of friends I had only recently acquired. It was late at night and super dark, and we kept driving in circles. We were super lost. We stopped at a gas station, and once we were inside, it looked like a McDonalds from the '90s. All these people were there, but they were spread out and just staring. I remember turning around and not seeing my friends anymore, but when I turned back, they were there, but there was blood dripping out of their noses. I tried to get out, but the people there were trying to block me. A woman with a baby stroller blocked my way. I remember (somehow) making my way to the double doors. When I opened them a bright light hit me, and it was suddenly daytime. The car was parked by the gas pumps. This mechanic comes out in a panic asking if I was okay. When I looked at my reflection, I was drenched in blood. And then I woke up. ... I immediately wrote it down after waking up. I had never had a dream that was so close to a nightmare but was filled with so much existential dread.

What are some of the film's themes?

There's a lot about grief and how certain people deal with grief—or really don't. The main character of the film is someone who has never tried to step on anyone's toes. He doesn't really want to upset the status quo that much, and that kind of comes to bite him in the a. He doesn't want to try to rock the boat a lot, and if he had, maybe a lot of this wouldn't have happened. So it's sort of about him coming to terms with what he's done and accepting it. ... There's also a thing about toxic masculinity and how guys aren't supposed to cry or show emotion, and that's something he's having a problem with. Really, the whole film is about him coming to terms with the fact that it's OK to not be strong, and that it's OK to cry and feel things.

Why do you think these themes are important?

I don't think we discuss these themes enough. The film also deals with the issue of school shootings and how—it's weird that predominantly these attackers are straight white men for some reason; I don't know why. But it's something about what we're teaching these kids. So there's a bit of a scene in there about the shooter and how he has the same kind of entitled, misogynistic outlook on life. I think it's important to talk about why these things happen and try to figure out how we can stop it so that we can be happier and safer.

What do you hope viewers will take away from the movie?

More than anything I hope they just have a good time, because it is a fun, suspenseful, eat-some-popcorn kind of movie. But at the same time, I do hope it makes people think about how as a country we have a little work to do in how we raise our boys, and how we should probably teach them that it's OK to cry and feel things, and that violence is not going to be the way to get your point across.

The film premieres on Thursday, Sept. 12, at 7 p.m. at Malco Grandview Cinema (221 Grandview Blvd., Madison). People can purchase tickets for "A Stranger Among the Living" in advance at brownpapertickets.com.