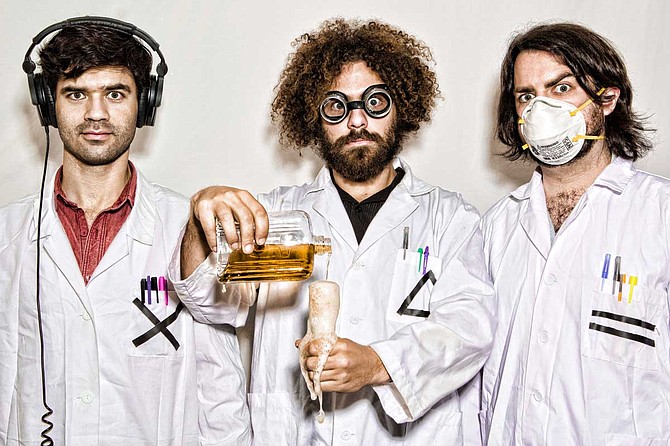 "This new album is the culmination of years of songwriting and producing," bassist Dan Africano says. "It is the best representation of what the band is now."

The instrumental band consists of Scott Flynn on trombone, Neal "Fro" Evans on drums and Africano on bass. Coupling a grounded sense of discipline with exuberant musical exploration, the group is dedicated to making music that is unlike any other as the musicians constantly strive to create new and memorable sounds.

"We're all kind of music nerds, so we like everything from jazz, heavy metal, to Avant-garde music and everything in-between, but we try to stay grounded in music rudiments and music fundamentals like melody and accessibility, energy and skill while at the same time ignoring all that and trying to reach new ground," Africano says.

The trio met while at Berklee College of Music in Boston, Mass., and formed their own band in 2010. They all currently live in Denver, Colo.

Tubby Love, a friend of the band's members, chose the group's name on-the-spot the moment before its first show began. The trio had assembled a list of possible names but could not settle on one. When Love was introducing the band onto the stage to perform, he selected Elephant Wrecking Ball, and the name stuck.

When asked about the peculiar names of some of their songs such as "She's Not Bringing Me My Sandwich Tonight," "Stomp Stomp Stomp," or "Zombie Wind," Flynn the song names' selection were sometimes "happy accidents or sometimes spontaneous." He added more seriously, "I came up with the name 'Zombie Wind' because it's like looking at the lovely course of events of the world these days it just kind of gave me this impression that there was a wind turning people into zombies." Africano notes that smartphone culture inspired the song.

This album, which released Oct. 11, was long in coming because all members of the trio are busy with their own projects and tour with other groups: Scott tours with the group Odesza, Evans tours with Dopapod and Dan Africano tours with Ghost Light.

"This group is a passion project," Africano says. "This has always been the band that we fall back to when we want to make music just for music's sake. This is a very organic style of music because we're not trying to do anything to please anyone but ourselves—it's really the expression of ourselves playing what we want to play."

The musicians are excited about being able to tour together because they are busy with other bands and often do not get many opportunities to get together and really dig into the music they love night after night.

"We get to push the music further in terms of experimentation and improvisation," Africano says.

Because Elephant Wrecking Ball's performance in Jackson is toward the end of the group's tour, Africano says that the group is firing on all cylinders and that Jackson attendees will get them at their finest.

"We will be well-oiled and in a place where we feel comfortable taking risks and trusting each other musically to really push the boundaries of what we like to do," he says.

Elephant Wrecking Ball performs on Wednesday, Oct. 30, at Martin's Downtown starting at 10 p.m. General admission is $10. For more information on the band, visit elephantwreckingball.com or find them on Spotify, Apple Music, Google Play and other music platforms.