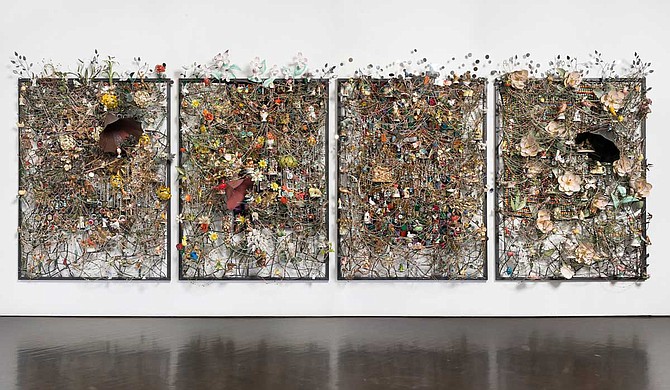 The members' opening panel discussion will take place at 5:30 p.m. on Oct. 24 followed by a reception at 6:30 p.m. The artist, Nick Cave, will take part in the tour. Former Jackson Mayor Harvey Johnson and former Jackson Police Chief and candidate for Hinds County Sheriff Lee Vance will participate in the panel discussion, which will cover themes of race, gun violence and civic responsibility in Cave's artwork, as well as how those issues impact the community and police work.

"Nick Cave: Feat." debuted at Frist Art Museum in Nashville, Tenn., in 2017. The exhibit includes 17 works, including 10 of Cave's signature "soundsuits," which are wearable sculptures made from repurposed everyday objects. Cave created the soundsuits as a response to Los Angeles police officers' beating of black man Rodney King in 1991, a release from the museum says. The suits are a symbolic covering against police brutality by concealing the wearer's race and gender. The exhibit also features sculptures, video and other installations.

Fresh Market "Take A Slice Out Of Hunger" Campaign

Fresh Market will donate $1 from the sale of every cream pie sold in its bakery cold case to Feeding America for the month. Every $1 donation helps provide at least 10 meals for families in need, a release from Fresh Market says.

During 2018, Fresh Market's "Meals on a Mission" fundraising campaign and "Take A Slice Out Of Hunger" raised a combined $250,000 for Feeding America, the release says. Fresh Market has helped provide around 2.5 million meals in 2019.

The cream pies are new to Fresh Market for 2019. The pies are $15 and come in Pumpkin Praline, French Chocolate Silk, Bananas Foster and Chocolate Silk Peanut Butter flavors.

Erin Austen Abbott, a photographer and owner of art shop Amelia in Oxford, created the art show in 2007. During the event, local artists each take over a room in the motel and turn the space into an art gallery. The Lamar and Yoknapatawpha Arts Council sponsor the event.

The show will include a "first dibs hour" from 5 p.m. to 6 p.m. was added. First dibs tickets are $20 and include a light dinner from Smoke Shop Oxford and the chance to browse and purchase art early. Tickets for first dibs hour will be available at the door or on eventbrite.com.

The Ole Miss Motel art show opens to the public for free from 6 p.m. to 9 pm. Pam's Gujju House, the Oxford Creamery and Smoke Shop Oxford will sell food and ice cream for sale, and Jackson Beer. Co. and Wonderbird Spirits will sell drinks. Artists will take credit cards and cash for art purchased.

No parking will be available on the premises. Guests can park at the bank across the street from the Ole Miss Motel or at one of the lots or parking meters near the Square in Oxford. For information, call the Ole Miss Motel at 662-234-2424. For a full list of participating artists, click here.