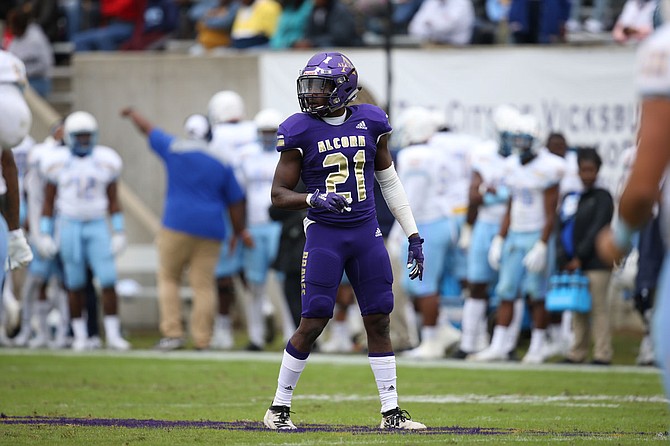 No team in the history of the SWAC has played in six straight championship games. Alabama A&M University stood in the way of the Braves and history when the teams met on Saturday, Nov. 16, in Lorman, Miss.

Both offenses were able to move up and down the field and score points. In the end it took a few key defensive plays by Alcorn State to win the game. The Braves held on for a 34-28 victory over the Bulldogs.

Alcorn State junior defensive back Juwan Taylor made one of the biggest defensive plays in the game late in the third quarter. Alabama A&M drove to the Braves to the 10-yard line, and the team was facing a third and seven when Taylor ended the threat with an interception in the end zone.

The interception was the first for Taylor at Alcorn State and was part of a strong defensive performance for the former Provine High School star. Taylor finished the game with 10 total tackles that was just one shy of his total against Prairie View A&M University, and he recorded 0.5 tackles for a loss.

Taylor picked off a second pass and returned it for a touchdown before the play was nullified for a pass interference penalty on the Braves. In the end, the defense and Taylor made enough plays to earn the win, a sixth straight SWAC East Division title and an appearance in the conference title game.

The SWAC named Taylor Defensive Player of the Week for his play against the Bulldogs. Joining him in earning conference honors was freshman running back Niko Duffey, who finished the game with 100 yards rushing on 17 carries with a touchdown to be named SWAC Newcomer of the Week. Duffey has been honored by the SWAC twice this season after earning the same award for his play against Alabama State University.

In his first season with the Braves, Taylor has made 63 total tackles, 40 solo tackles, four pass breakups, 3.5 tackles for loss, one sack, one forced fumble, one fumble recovery and one interception. Taylor joined Alcorn State after two seasons at Northeast Mississippi Community College.

Upon graduating Provine High school, Taylor played in nine games as a freshman for Northeast. He recorded 57 tackles 37 solo tackles 1.5 tackles for loss, one pass break up and one interception for the 2017 season.

Alcorn State will meet the winner of the 2019 Bayou Classic between Grambling State and Southern University. But the Braves have some unfinished business to take care of this Saturday, Nov. 23.

ASU travels to Jackson, Miss., to face off against main rival Jackson State University. If the Braves win they will host the SWAC Championship Game. If Jackson State pulls off the upset, Grambling State or Southern will host by holding tie breakers over the Braves.

Jackson State and Alcorn State will face off at Veterans Memorial Stadium Saturday with kickoff scheduled for 2 p.m. and the game broadcast on ESPN3.