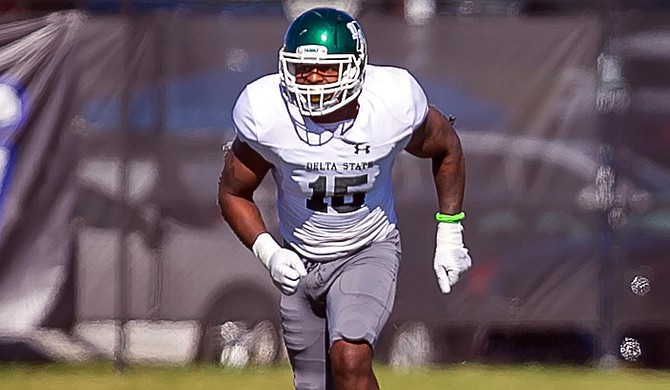 Clinging to an eight-point lead, Delta State University turned to its defense to get one final stop against the University of West Georgia. The Wolves took over with 1:26 left on the clock at their own nine yard line down 28-20 to the Statesmen.

West Georgia faced a second and 13 when Delta State defensive end sacked and stripped the ball from the Wolves' quarterback Garrett Bass. DSU linebacker Marvin Terry scooped up the ball and returned it eight yards to seal the victory for the Statesmen.

The Dallas, Texas, native finished the game with five tackles, three tackles for loss, two sacks, a fumble recovery, a forced fumble and the touchdown return. The Gulf South Conference recognized his big game by naming the linebacker GSC Defensive Player of the Week.

In nine games this season, Terry has 45 total tackles, 35 solo tackles, 12.5 tackles for a loss, 10 quarterback hurries, six sacks, three forced fumbles, two fumble recoveries and one blocked kick. He is the third different DSU player along with senior linebacker Vada King and junior defensive back Junior Faulk, to be named GSC Defensive Player of the Week.

Terry is ranked 24th in total tackles, 17th in solo tackles, sixth in tackles for a loss, fifth in sacks, fourth in forced fumbles, third in fumble recoveries, and first in fumble returns in the GSC. He is second on the team in solo, total tackles and sacks. He is tied for second in tackles for a loss and blocked kicks on the team. Terry leads the Statesmen in forced fumbles and fumble recoveries.

While at South Oak Cliff High School in Dallas, Texas, Terry finished his high school career with 354 total tackles, 205 solo tackles, 80 tackles for a loss, 56.5 sacks, with five forced fumbles and five fumble recoveries. He finished as a three-time All-District selection during his time at Oak Cliff.

Delta State is currently ranked eighth in the NCAA Regional II Poll with the top seven teams in the final rankings from each of the four regions advancing to the NCAA Division II Championship Playoffs. That sets up major implications for the Statesman's season finale.

DSU finishes the season against Mississippi College in Clinton, Miss., this Saturday, Nov. 16, with kickoff set for 2 p.m. This is the 40th meeting of the Heritage Bell Classic as 6-3 overall and 5-2 GSC Delta State clashes with 4-5 overall and 3-4 GSC Choctaws.