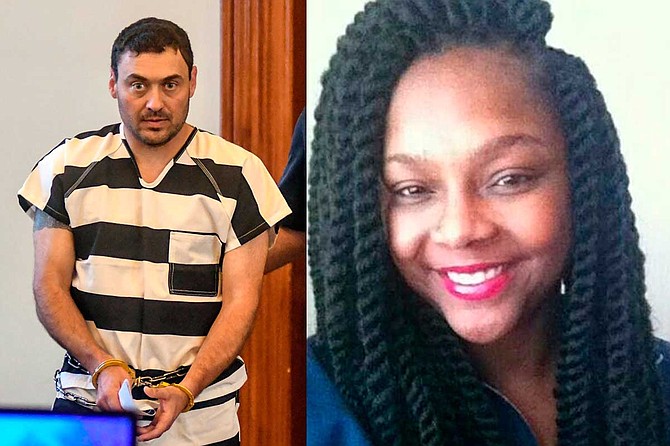 Matthew Kinne (left), 38, is charged with murder in the shooting death of Dominique Clayton (right), 32, of Oxford. Her 8-year-old son found her body when he returned home Sunday. The mother of four had been shot in the back of her head. Photo by Bruce Newman/The Oxford Eagle via AP

OXFORD, Miss. (AP) — A Mississippi city has fired a police officer charged in the killing of a woman with whom he was romantically involved.

In a related development, a judge who presided over the officer's first court appearance has stepped away from the case after the victim's mother said the judge was disrespectful.

Kinne, 38, is charged with murder in the shooting death of Dominique Clayton, 32, of Oxford. Her 8-year-old son found her body when he returned home Sunday. The mother of four had been shot in the back of her head.

Kinne is white and Clayton was black. Her relatives say they were in a romantic relationship.

Kinne had worked for the Oxford Police Department since 2015. He remains jailed in a neighboring county.

Clayton's mother, Bessie Clayton, expressed outrage Wednesday after a prosecutor told a judge that prosecutors and defense lawyers might agree next week on "reasonable" bail for Kinne.

"There is no justice for black people," Bessie Clayton said.

She also said that Circuit Judge Andrew Howorth, who is white, had laughed during Kinne's court appearance, and that was a sign of disrespect to her slain daughter.

"This judge has got to go," Bessie Clayton said.

During the court appearance , Howorth sought to present written charges to Kinne's defense attorney and then realized he did not have the papers. Howorth sent Kinne and the attorney to sit back down and a court employee delivered the papers to the judge as Kinne sat. Although a video camera at the hearing cut away from the judge, Howorth can be heard saying to Kinne and his attorney, in a lighter tone of voice, "Come on back up."

The newspaper reported that in an order recusing himself Thursday, Howorth referred to the family's public statements their potential effects on the future of the case if he were to stay, prompting his decision to step away from the case.

"Statements made to the media —whether motivated by grief, anger, fear, confusion, or ignorance — are repeated by the media. Then those statements meld their way into and through social media, where they then apparently are often considered to be facts," Howorth said in the order. "Thereafter, public confusion or misunderstanding has an actual, genuine risk of impacting fairness at trial."