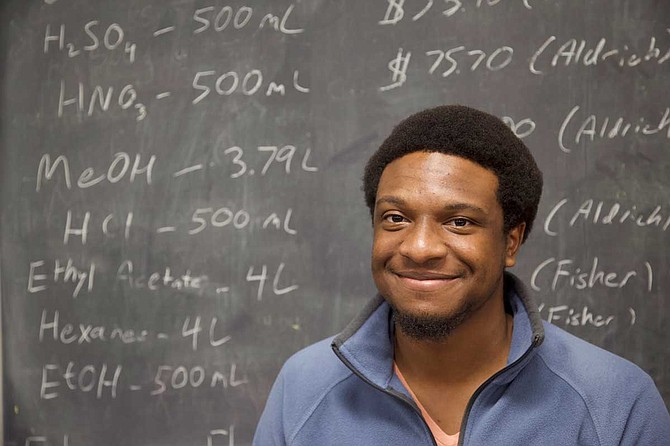 Clarksdale native D.J. Hawkins became fascinated with gastroenterology, or the study of the digestive system, at age 15 when he began researching the field after developing chronic gastrointestinal reflux disease, also known as acid reflux.

"I always wanted to be a doctor because I love how flexible the medical field is, but when I developed stomach issues and started reading about digestive health, I ended up falling in love with the field," Hawkins says. "I wanted to learn more and find out all about how digestive health affects people."

As part of his efforts to learn more, Hawkins spent a week shadowing a gastroenterologist in Columbus, Miss. While there, he learned about procedures such as colonoscopies and endoscopies, which involve using a tube with a light and camera to examine different parts of the digestive tract. The doctors also helped him learn about his acid reflux and treat it through medication, and developing a better daily eating plan, he says.

Hawkins, 21, is a lifelong resident of Clarksdale and went to high school at the Mississippi School of Mathematics and Science in Columbus. He graduated from MSMSC in 2015 and enrolled at Millsaps College in August that year. He is currently in his senior year and set to graduate with a bachelor's degree in biochemistry on May 11, 2019.

Hawkins also served on Millsaps' Honor Council and studied as a summer researcher in chemistry as part of the MS IDeA Network of Biomedical Research Excellence program, which funds undergraduate students to do research in their field. In it, Hawkins worked to synthesize a chemotherapeutic drug called doxorubicin, which is used to treat patients with colon and stomach cancers.

Recently, Hawkins also received a Fulbright grant to teach and study in Russia as an English teaching assistant for Russian medical students. His term is September 2019-June 2020.

While Hawkins says he is not yet sure which medical school he would like to enter after he finishes the Fulbright program, he is confident that he will find success anywhere he decides to go.

"Whether I decide to be a doctor or teach at a medical institution, there are many opportunities available for someone with the skills I've learned," Hawkins says. "I don't know where life will take me at the moment, but I am hoping that many doors will open up for me, and that I'll be able to go where they take me."