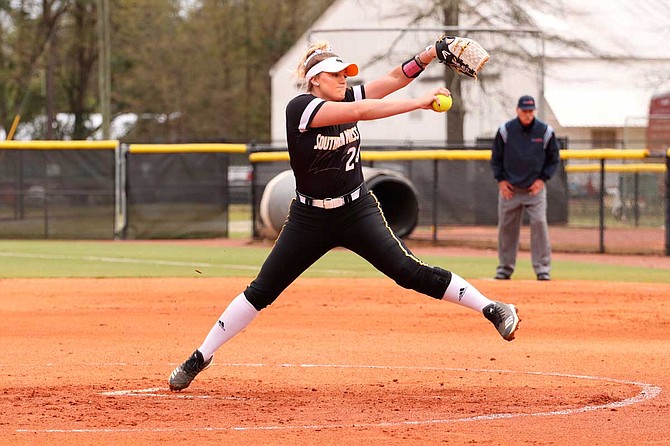 Junior pitcher Abby Trahan is enjoying a strong start in her first season with the University of Southern Mississippi softball team. After spending two seasons pitching for Saint Francis University, Trahan transfered to USM after her sophomore year.

Currently the Kaplan, La., native ranks in the top 10 in several pitching statistics for Conference USA. She is third in earned run average at 1.76, fourth in batters struck out with 64, tied for fourth in games started with 13, and is fifth in innings pitched at 79.1 and ninth in opposing batting average at .224.

This season, Trahan has appeared as the starting pitcher in 13 games. She has a 5-7 record in those starts and leads the team with a game-high nine strikeouts that she accumulated in games against Jacksonville State University and Florida Atlantic University.

She leads the Golden Eagles in most pitching statistics this season. Trahan has given up just 68 hits, 34 runs, 19 earned runs and 15 walks. She is leading a pitching staff that tops C-USA in team ERA.

Last week, the junior produced one of her best on-the-field performances of the season. She went 2-1 in three starts from March 13 to March 17.

The next start came on Saturday, March 16, against Florida Atlantic University in game two of three. Trahan pitched a complete game with six strikeouts, but gave up two walks and three runs (two of them earned), and allowed six hits. The Owls took the game with a 3-1 win.

Trahan started during the third game against FAU on Sunday, March 17. The junior threw a complete game shutout, allowing just two hits and issuing only two walks. She tied her season high with nine strikeouts, and the Golden Eagles won 2-0.

In three starts last week, Trahan pitched 20 innings, struck 20 batters out and finished with a 0.70 ERA. She allowed 13 hits, and gave up four walks and three runs, with just two earned.

Trahan's pitching earned her Conference USA Pitcher of the Week honors. She is the first Golden Eagle softball player to earn any conference weekly honors this week.

While a freshman at Saint Francis University, Trahan earned Northeast Conference Rookie of the Year and National Fastpitch Coaches Association All-Region Third-Team. She appeared in 35 games with a 15-4 record and three saves.

As a sophomore she earned NEC Pitcher of the Year honors, along with First-Team All-NEC, and NFCA All-Great Lakes Region Second-Team. She saw action in 46 games with 36 starts.