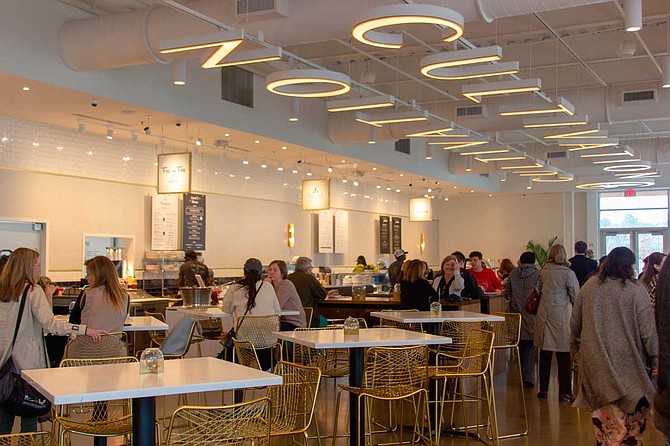 More than half of the businesses at the District at Eastover’s Cultivation Food Hall in Jackson have women ownership in some form. Photo by Acacia Clark.

Cultivation Food Hall is quickly becoming one of my favorite places because it has so much food, and so many places to choose from. The first time I went, I tried the chicken and waffles from Fete au Fete StreEATery, and it was the best. While I will refrain from getting that dish in the future (as much as chicken and waffles is my favorite dish, it's also unhealthy), I am glad I tried it.

In the last few times I've been at Cultivation, I had a poke bowl complete with lots of things I've never tried before, and of course, a few of the items from Ariella's because you can never go wrong with a Reuben. I've also had some of the best coffee I've ever tasted from il Lupo.

But now, I like it for a different reason: It allows me to support other women.

If you missed my cover story about Cultivation's women-owned businesses, you can read it at jacksonfreepress.com/cultivationfoodhallstory. But if you've already read it, you know that female ownership is the norm at Cultivation. There are nine total vendors in the hall. Women have full ownership of four of the businesses (Ariella's, Poke Stop, Fauna Foodworks and Whisk), and co-ownership of two (il Lupo and Bocca Pizzeria have husband-and-wife teams at the helm).

That's more than half with at least some female representation—an important fact considering that it wasn't until recent years that women started to gain a better foothold in the industry.

National Restaurant Association data from 2017 showed that women own more than half of the restaurants in the U.S., though the amount of women chefs is still pretty dismal—with only about 19 percent in the U.S.

As women, we tend to get the short end of the stick on a lot of things—upper-management jobs, wages (the gender pay gap is real, and it's even more substantial for women of color), maternity leave, bodily autonomy (thanks, Legislature), "pink taxes" (even though for most nonmenopausal women, tampons and pads are not optional), clothing size, the type of clothing stores try to sell us. I could go on, but you get it. Sometimes we also don't get the level of support that our male counterparts might get, so it's nice to step into a place like Cultivation and know that people are supporting women.

To me, it's a sign of changing times. It's a sign that either people are taking us more seriously, or that we're just digging in our heels and not budging.

On my part, at least, it's probably the second one. I've talked a lot, either in past editor's notes or in real life, about how I'm an anomaly. At 29, I'm upper-level management in a local business. I own a house. I'm on three leadership teams at my church. As you can tell, I dug my heels in.

Like a lot of women might, I sometimes want to minimize my accomplishments or pretend or act like they're not there. I've noticed that some people seem to be uncomfortable with my lifestyle, or at the very least, aren't quite sure how to handle me. A lot of other accomplished women, or just women in general, probably feel the same, and that's such a travesty. We have to change that.

We're more than just daughters and wives and mothers. We're people with dreams and goals and visions, and we want to rule the world, too. (In fact, I'd prefer if women did rule the world, but that's just my opinion.) We have things we want to accomplish and have accomplished. For me, I want to be a published fiction writer, famous artist and a DJ. Can I accomplish all those things? Yes. Can I do it in one lifetime? Who knows? A friend of mine told me that as people, we can do anything, but we can't do it all at once. I believe her.

Here's the next question: Should I, or any of us women, apologize for our accomplishments? Of course not. We shouldn't apologize for doing the things we love and accomplishing our goals.

There's nothing wrong with being a mom and running a successful business, or just doing well in your career.

As women, we need less criticism and more support. We need people who will step up and remind us of all that we've accomplished. (Thanks to all the friends, men and women, who have done that for me.) We need people who will go to Cultivation and order from a women-owned business to help keep them in operation and motivating other women to follow their lead.

We need people, both men and women (because society is everyone's problem), to stop looking down on us or looking at us weird because we've made different choices. When we stop doing that, I feel like we can truly progress as a society.

In the words of Rachel Hollis, whose newest book gave me the idea for this column, "Girl, stop apologizing."

Managing Editor Amber Helsel is a storyteller who moonlights as an artist. She loves food, cats, anime and art supplies. You can often catch her running sound at CityHeart Church. Email story ideas to amber@jacksonfreepress.com.