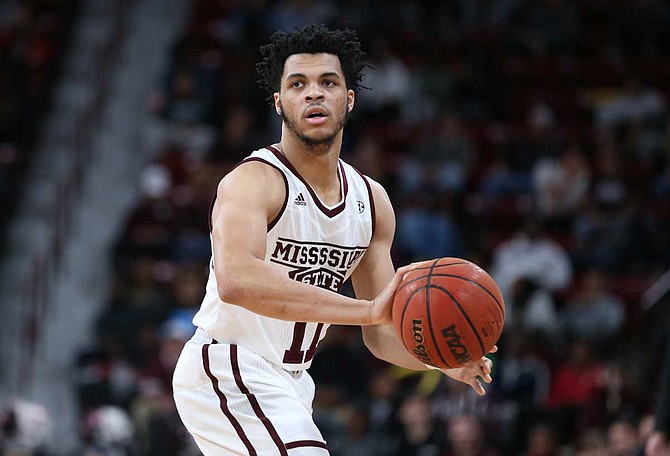 Quinndary Weatherspoon has improved each year since he was named to the all-SEC freshman team in 2015 and the All-SEC first and second team squad the last three years, said Bulldogs head coach Ben Howland. Photo courtesy MSU Athletics

Weatherspoon and McCowan received the awards at a special luncheon Monday hosted by the Mississippi Sports Hall of Fame and attended by coaches, fans and other guests. A select group of news media who cover college basketball in Mississippi and a separate fan voting contest administered by C Spire chose the eventual winners.

The 6-foot-4 senior from Canton, Miss. and four-time Howell Trophy finalist was selected over two other players – Ole Miss junior guard Breein Tyree and University of Southern Mississippi senior guard Cortez Edwards, a two-time finalist. This is the second straight year that Weatherspoon has won the award.

Weatherspoon finished as the Bulldog's leading scorer, averaging 14.7 points a game, and the team's third-leading rebounder with 4.9 a game. He also was fourth in the SEC in field goal percentage and averaged 1.6 steals a game and 2.6 assists a game.

McCowan, a 6-foot-7 senior guard from Brenham, Texas, led the No. 5-ranked Lady Bulldogs to their first SEC championship on Sunday and was the league's leading rebounder with 13.5 rebounds a game and fifth leading scorer at 17.8 points a game this year. She bested teammates Jordan Danberry and Anriel Howard for the award.

"If T is not the most dominating player in the game today, I'd like to know who is," said Mississippi State women's head coach Vic Schafer. "She plays both ends of the court and can't take plays off because she affects the game so much and is integral to our offense and defense."

"T has made me a better coach, but what she probably doesn't realize is that she's made me a better father – I've learned more patience and understanding and have come to appreciate … the biggest transformation of a player and student-athlete that I've coached in all my 34 years," Schafer said through misty eyes.

Weatherspoon has improved each year since he was named to the all-SEC freshman team in 2015 and the All-SEC first and second team squad the last three years, said Bulldogs head coach Ben Howland. "Q is built to play the game. He has a perfect basketball body. He's improved every year, which is what you want as a coach."

Howland said Weatherspoon keyed Mississippi State's 25-12 record last year and led the team to the final four of the National Invitational Tournament in New York. "He is really the main reason why we are going back to the NCAA tournament this year for the first time in 10 years. Q will be an NBA player, I have no doubt about that."

For the sixth time in the history of the awards, Mississippi hoops fans had the opportunity to take part in the voting for the C Spire Howell and Gillom Trophies. Fan voting counted for a weighted 10 percent of the awards total. Weatherspoon finished second in the fan vote for the men's award and McCowan won the women's fan vote.

The C Spire Howell Trophy is named after Bailey Howell, a two-time All American at Mississippi State and a six-time NBA All-Star who played on Boston Celtics world championship teams in 1968 and 1969. Howell, a 1977 inductee to the Mississippi Sports Hall of Fame and the first Mississippi player inducted into the National Basketball Hall of Fame, still hold nearly a dozen season and career records at his college alma mater.

The C Spire Gillom Trophy is named after Abbeville, Miss. native Peggie Gillom-Granderson, Ole Miss' all-time leading scorer and rebounder. She coached in the WNBA, the Olympics and was associate head coach for the Lady Rebels before retiring in 2009.

"There's definitely some NBA and WNBA-caliber talent among this year's C Spire Howell and Gillom Trophy award winners and finalists," said Jim Richmond, vice president of Marketing for C Spire. "This has been another great year in terms of individual performance and overall leadership among basketball teams in our state," he added, noting that several of the teams led by this year's award finalists are headed to post-season play.