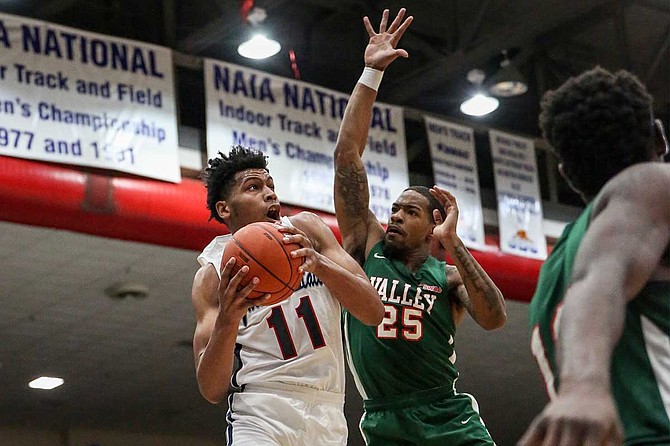 Photo by Charles A. Smith/JSU Athletics

The Jackson State University men's basketball team's season came to an end on Tuesday, March 12, after the Tigers fell 58-49 to Alabama State University in the quarterfinals of the SWAC Men's Basketball Tournament. Just hours before, the conference had named Jayveous McKinnis Freshman of the Year.

The Brandon, Miss., native not only earned the conference's Freshman of the Year Award; he also earned All-SWAC First-Team honors. Over the season, McKinnis averaged 8.3 points and 7.7 rebounds, and led the conference in blocks with 2.1 per game.

McKinnis didn't just lead the SWAC in blocks but also in shooting percentage with an average of 67.3. His defensive presence helped Jackson State achieve the best scoring defense in the conference.

In his first game as a Tiger, McKinnis scored 16 points, grabbed six rebounds and blocked three shots against the University of Louisiana-Monroe. In early December he recorded his first double-digit rebounding effort with 11 boards against Pepperdine University.

The 6-foot, 7-inch, 215-pound center notched his first double-double of the season against Fisk University with 15 points and 11 rebounds. Over the course of his freshman season, he recorded four double-doubles.

McKinnis scored a career-high 19 points in the regular season finale against Alabama State, and a career-high for rebounds and steals with 14 boards and three steals against the Hornets in the quarterfinal loss.

In a game against the University of Arkansas-Pine Bluff, he rejected a career-high six blocks. The center finished five games with a perfect field-goal percentage, and in 14 games finished higher than 60 percent.

The freshman finished with just 20 turnovers on the season for 0.7 per game. He finished with 29 steals and eight assists to cap off his first year in college.

The conference selected forward Marneisha Hamer to the All-SWAC First-Team, and guard Christiana Ellis made All-SWAC Second-Team. The JSU women's team fared better against Alabama State when the Tigers won in a 75-59 blowout victory in the quarterfinals of the SWAC Tournament.

Jackson State women's team will face Prairie View A&M University in the semifinals. A win would put the Tigers in the finals, and one win away from a NCAA Tournament bid.