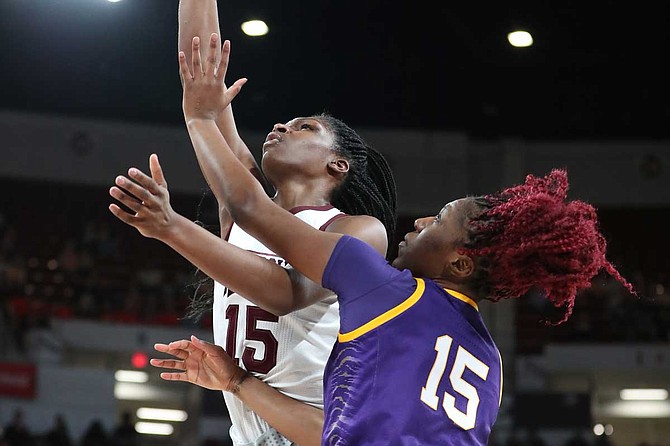 Teaira McCowan has spent the last four years growing as a basketball player at Mississippi State University. As a freshman, she averaged 6.6 points, 5.6 rebounds and 1.3 blocks per game. Because of her success, the SEC has named her to the All-Freshman Team.

The Brenham, Texas, native improved her play as a sophomore during the 2016-2017 season. Her average went up to 8.7 points, 7.1 rebounds and 1.5 blocks per game as she made an appearance in every regular-season and postseason game.

McCowan enjoyed a coming-out party as a junior when her scoring average jumped to 18.2 points and 12.9 rebounds per game. The center started all 39 games and played more than 30 minutes in each. She recorded a double-double 18 points and 17 rebounds in the national championship game against the University of Notre Dame. Then, she earned the first ever Naismith Defensive Player of the Year and received the SEC co-Defensive Player of the Year award that year.

She entered the 2018-2019 season as one of the top players in the conference after coaches and the media recognized her as Preseason SEC Player of the Year and Preseason First-Team All-SEC.

The senior left little doubt that she would live up to the hype and accolades. McCowan averaged 17.3 points, good enough to place her fifth in the SEC, and she led in rebounding with 13.4 per game.

She broke the school record for career rebounds with 1,404, career double-double with 63 and tied the school record for career victories with 126 wins. The senior earned the final SEC Player of the Week award this week as she took home the honor for the fifth time this season and the ninth time over the course of her career. This marks her 10th SEC award and makes her the most decorated active player in the conference.

McCowan is one of the three finalists for the C-Spire Gillom Award, which goes to the best women's basketball player at a four-year university in the state of Mississippi. Former MSU player Victoria Vivians won the last four consecutive years.

The winner will be named on March 11 with a luncheon at the Mississippi Sports Hall of Fame and Museum. The best men's basketball player in the state will receive the Howell Award at the luncheon.

McCowan and the Bulldogs return to the court on Friday, March 8, against the winner of the No. 9 seed Louisiana State University and No. 8 seed University of Tennessee in the SEC Women's Basketball Tournament. As the No. 1 seed, MSU earned a double-bye in the tournament and is looking to win the tournament after making the finals for three straight years.