The Murals: A Place for Creatives 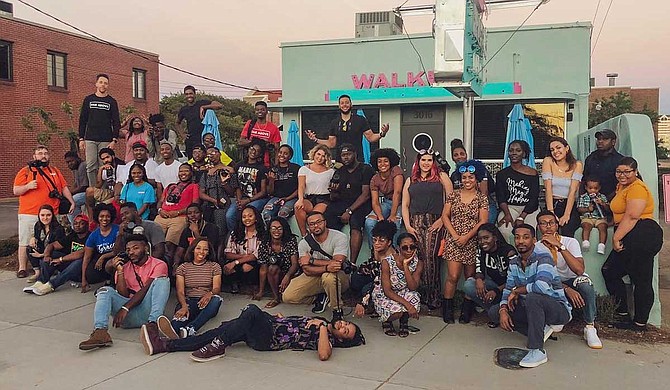 The Murals, a multimedia business that Amanda Paige created, often hosts events such as photo walks in Jackson. Photo by Keon Gibson

Producer Amanda Paige knew the type of business she wanted to add to the Jackson art scene: something that could bring creatives together.

"We've got little pockets here and there," Paige says. "Things are not continuous, thriving, booming. There's room to grow."

The result is The Murals, a business that functions as a collective where creatives like Paige can showcase their work. There, artists can display their products and wares, and the business also does commercials, music videos and more. The Murals also sells street wear on its website.

Paige did not originally imagine herself owning a creative business. The Florence, Miss., native attended Mississippi State University, where she majored in finance and minored in business management. After graduating with her bachelor's degree in 2015, she began working as a location manager with Hertz Corporation, shuttling from Jackson to New Orleans. Eventually, though, she began to realize that the job was not suitable for her exploration of creative passions, like film documentary work.

She opened The Murals in Jackson in late 2017. The business collaborates with photographers and videographers such as Austin Robinson of ASVP Photos, photographer and hip-hop artist Alexander FRE$CO; photographer and musician Antonio Knott of Forty Acre Visions; and Kendrick Davis of Kreative Add Photography on projects.

"We bounce ideas off one another, teach each other," Paige says. "We also have space for podcasts, video services, product shoots, commercials, political campaigns. We can go on-site to film. Whatever the customer wants."

The Murals currently does videos and visuals for "Token Talk Off Air" where the podcasters conduct a version of NPR's "Tiny Desk Concerts."

The business also does photo walks in Jackson. "They began with an exploratory idea," she says. "That gives people an opportunity to learn about photography in more in-depth ways."

The event happens about four times a year, and has about 80 to 130 participants in each one.

The Murals also hosts workshops for photographers, videographers and more. "We encourage (them) and talk about different shooting styles," Paige says. "I schedule different photographers each month who have been working for at least three years and have a unique skillset."

Eventually, Paige aims to move her business to the midtown neighborhood.

"I want to build it up," she says. "I just need to find the right space. Hopefully, I can one day move all the street-wear merchandise from online to the storefront. Right now, I'm looking to build my clientele. Next year is a date I have in mind for moving."