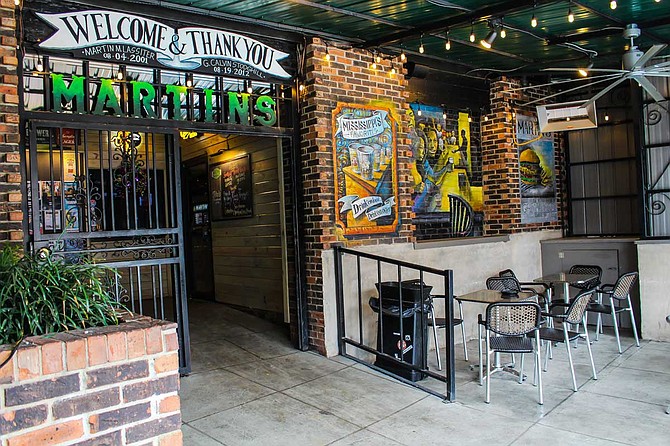 Martin’s Downtown has added some new changes over the last few years, from a new bar and stage, to a name change. Photo by Joseph Powell

Owner Joseph Stodghill says Martin’s Downtown tries to change up its menu twice a year. It’s a popular eatery by day and a popular bar (with food) at night. Photo by Joseph Powell

JACKSON — Martin's Downtown, previously known as Martin's Restaurant & Bar, has long been a staple of downtown Jackson, showcasing both local and touring bands, as well as giving Jacksonians a place to hang out. Lately, though, the bar has been undergoing some changes, including getting a new name.

Martin Lassiter founded Martin's in 1953. He met and became good friends with Calvin Stodghill in 1976. Stodghill bought Martin's in 1997, and his son, Joseph Stodghill, took over after his father's death in 2012.

"Little things needed improvement at the time," Joseph Stodghill says. "The women's restroom had one toilet. We started looking at some of the challenges and problems that we had, and just tried to bring it more up to the times. In doing that we've been able to keep a lot of the people that come in here every day, and a lot of the people that like the music scene."

In the past few years, the staff at  Martin's has been busy with revamping the venue and the menu in order to keep the restaurant and bar modern and the maintenance up-to-date.

A year and a half ago, they knocked down 42 feet of load-bearing wall, and built a new stage and a second bar.

"Last year, we remodeled the main bar," Stodghill says. "We completely stripped that and redid it, put in all new fixtures and everything else."

Stodghill said that Martin's tries to update the menu about once every year.

"We launched a menu probably about nine months ago, and we're about to tweak it and add some stuff and redo it again," he says. "The blue-plates are pretty much set in stone as far as lunch, but in the restaurant business, you're always trying to tweak your menu and drop things off that aren't as popular."

Another big change for Martin's was its recent switch to becoming a  nonsmoking bar.

"One of the biggest challenges we faced when we did that was trying to get the word out, and that if you didn't like it because it's too smoky, it's not smoky anymore," Stodghill says.

He says another challenge for Martin's is roping in big crowds to hear live music, especially younger generations, because there are so many different platforms that businesses have to promote on to get the word out.

Being one of the older bars in the capital city, Martin's has a certain antique, historical character that many new bars lack, Stodghill says of the venue.

"Ultimately, the saving grace for this place is that we've been very consistent through the years with music lineup," he says. "We want to be synonymous with great food, good drinks and great music. And us being around that long has really helped with that."

In the next year, Stodghill wants to focus on continuing to promote the changes they've made and "hone in on what we do really well, and fix some of the stuff we don't do as well." Stodghill is hopeful that Martin's will continue to improve and get better as time goes on.

What keeps him hopeful for the future of Martin's is the people.

"When you know that they've had a great meal, great drinks, and they're coming back and smiling, that's awesome," Stodghill says. "When you get 500 people plus in here, watching a great live show at night, and they're all just having a blast—that's really rewarding. And you're like, 'That's why I did all the work.'

"It's been challenging, but we're glad to still be here and blessed for the people that come in here and love this place. We're just trying not to screw it up."

The next big event Martin's is hosting is on St. Patrick's Day on March 23. The event is free for the events during the day, and there will be viewing bleachers to watch the parade. A DJ will be inside on the main stage, with more music outside on a stage. Martin's will also have two mobile bars, both 18-wheeler trucks. The night will end with a show by Afroman, accompanied by the local Epic Funk Brass Band, on Martin's main stage.

"It's pretty hectic, but it's a lot of fun and a safe environment," Stodghill says. "It's a marathon and not a race that day for a lot of people, because it starts early and ends early, if you know what I mean."