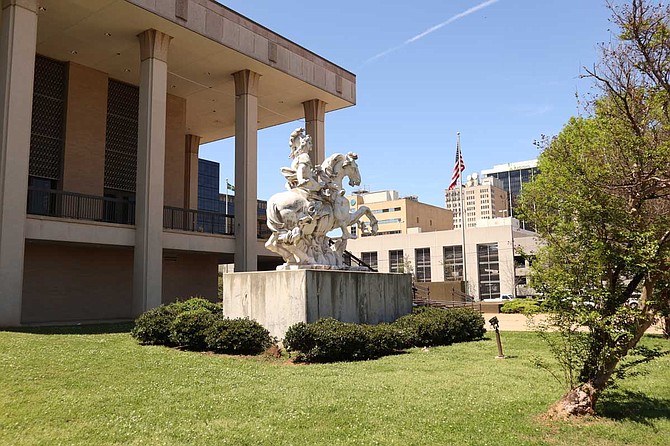 Downtown Jackson has the potential to be even better than it was 50 years ago. Photo by Amber Helsel.

I was walking around downtown Jackson one day recently, completely assuming that I would just walk to the Art Garden at the Mississippi Museum of Art like normal, and the garden would be quiet as usual. I could go and take some photos on my lunch break and then go back to the office and eat.

But that day in May, the Art Garden wasn't quiet. It was the day of the food truck festival on May 16, and apparently the organizers had decided to let some of the trucks start serving around lunch time. The trucks hummed loudly, the sound of their generators creating a cacophony that cut through the summer heat, and the smells combined to create a great and weird harmony. A few downtown workers milled about as they made decisions on what they wanted: fried rice, barbecue, ice cream, quesadillas?

It's the kind of thing most people would expect to see in a city the size of Jackson, but with the current state here, especially downtown, it's a rare treat to see a bunch of food trucks lined up, serving eats in the middle of a weekday. Granted, with Food Truck Fridays and Downtown Foodie Friday Festivals being in the mix, it's not as rare as it used to be, but still.

I'll be transparent about something: When I first started working at the Jackson Free Press and our office was still in Fondren, I was scared to go south on State Street toward downtown. Yes, State Street. In my mind, I thought something bad would happen if I went too far that way. I wanted to go to Keifer's in Belhaven one day, and I think I got about as far as the University of Mississippi Medical Center before I thought twice and turned around.

But then we moved the office downtown, and it's like a whole new world opened up. There we were in this neighborhood with great architecture, and lots of green space and places to go. But, something (or rather a lot of things) has been missing in my explorations.

To me, you can always tell a lot about a city based on its downtown. Hattiesburg's is fairly small (though it's decent for a city its size), but it has a lot of character and really cool businesses. Oxford has the Square, which, to me, is at its best during the summer when there are fewer college students. Ocean Springs' downtown is has businesses of all types (candy, clothing, art galleries, etc.) lining a few streets, and it's fairly close to the beach, so that's a bonus. Don't get me started on tiny little downtown Brandon.

Now let's look at cities in other states. Memphis' downtown is one of my favorite places to be these days. There's so much to do, and the public transit (at least for that area) seems to work. Plus, there's a real trolley on Main Street now.

Detroit's downtown is full of these endlessly tall skyscrapers and lots of food and businesses and shops and people doing different things. Both cities' downtowns are buzzing with activity, even on a weekday.

So if downtown says a lot about a city, what does ours say about us? Fifty years ago, downtown Jackson probably rivaled the likes of Memphis and Detroit. You can look at photos and see how bustling it was. Now, though? It's not that. While the City and some Jacksonians are working to create change in the neighborhood, it's still a ghost town. When I'm out and about, I may see about 10 people outside. Ten, total. Sometimes more, especially around lunch, but it's still a low number. In Memphis, you could see upwards of 25 to 50 people on one street on a weekday. It's never quiet there. And it's definitely never quiet in a place like Detroit. And there are things to do. Granted, there is more than people think in downtown Jackson (after all, our office building has three museums within walking distance), but a handful of attractions and businesses do not a good downtown make.

You can always tell who sees the glass half empty because those are the people who see urban blight in a poor city like Jackson and say, "It's too far gone."

Then there are people who see a place of possibilities, like Downtown Foodie Friday Festival founders Alivia Ashburn-Townsend and Sherry Wallace, who saw an empty park and street and said, "How can we make this better?"

"When you go to capital cities in other states, the downtown area is being used significantly to bring in revenue for the city as far as attractions and festivals and businesses and just in general," Ashburn-Townsend, who also owns Ariella's NY Delicatessen at Cultivation Food Hall, told me in May. "Ours is a ghost town. How do we change that? It's going to start with one event and one person at a time."

And there are people like Sam Tilahun, who saw a need for more types of cuisine in downtown Jackson and decided to open Shiro Cafe & Restaurant right here at Capital Towers. In the absence of Jubilee! Jam, Ardenland and Cathead Distillery joined forces a few years ago to give Jackson a music festival of its own: Cathead Jam, which was May 31-June 1 this year.

So what do we want downtown to say about us? Frankly, I want it to say that we're a city that's moving forward—not moving backward and definitely not stagnating, which is almost worse than moving backward. At least backward is a direction. Stagnation just is. The current state of downtown does show upward movement. It's just happening at a slower pace than we want it to. I want to see the day when Jackson is better than it is now, and maybe even better than it was 50 years ago.

I think that day will come. We just have to keep pushing forward. Let's bring in more business, transportation and people.

And get out and support what's here.

Managing Editor Amber Helsel is a storyteller who moonlights as an artist. She loves food, cats, anime and art supplies. Email story ideas to amber@jackson-freepress.com.