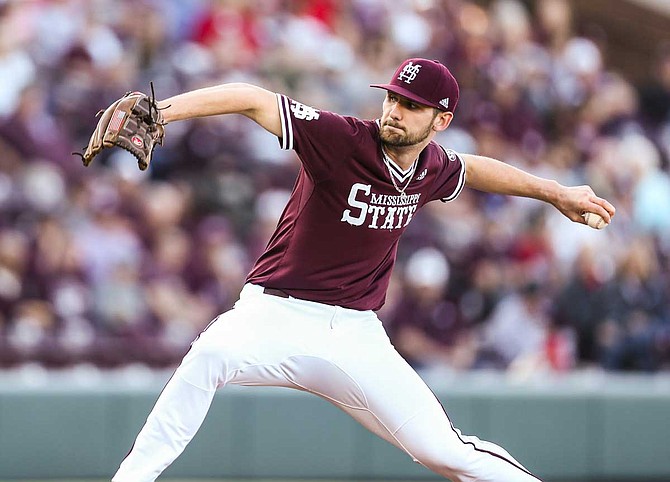 In the long and bright history of Mississippi State University baseball, it might be hard to find a player with a bigger breakout season than redshirt junior Ethan Small. The pitcher is enjoying his best season on the mound as a Bulldog in what could be his final year.

Small's career started with 15 appearances as a freshman with all his appearances coming in relief. He won just one game and posted a 13.07 ERA with 20 strikeouts. In eight of the times he entered the game, he went an inning or longer. His work in the classroom earned him SEC First-Year Academic Honor Roll.

The left-handed pitcher missed all of his sophomore season in 2017 due to an elbow injury which required surgery. Small then had a redshirt season as he went through rehabilitation to get ready for the 2018 season.

The Arizona Diamondbacks drafted the Lexington, Tenn., native in the 26th round of the 2018 MLB Draft. However, he chose to return to school instead—a decision that could not have turned out better for the pitcher.

This season, Small has been outstanding. He owns a 9-2 record with 16 games started. He did not suffer his first lost until April 2019 in this 10th start of the season against the University of Arkansas.

He experienced his second loss this season in May against Vanderbilt University in the SEC Tournament. Small went 7-1 in SEC play during the regular season. He went 5-2 against ranked foes the Bulldogs faced this season with nine starts against the teams.

Small has yet to allow more than three runs in his 16 starts this season, and in 15 of those starts, he allowed two or fewer runs. In 96 innings of work, Small has posted an outstanding 1.88 ERA with 160 strikeouts. He has allowed just 53 hits, 22 runs, 20 earned runs and walked 27 batters he has faced.

His 302 career strikeouts make him the third pitcher in MSU history to reach that mark behind Eric DuBose (428 strikeouts) and Jeff Brantley (364 strikeouts). He is the sixth MSU pitcher with multiple 100 strikeout seasons.

The 160 strikeouts for Small this season is the second best in school history. It is the ninth best for a single season in SEC history, and is second in strikeouts in the NCAA this season.

Small was a finalist for the 2019 Ferriss Trophy but lost to teammate Jake Mangum. He earned SEC Pitcher of the Year and First-Team All-SEC honors for his work on the mound. Collegiate Baseball Newspaper named him First-Team All-American.

The accolades might not stop pouring in for the pitcher. He is a finalist for the College Baseball Foundation's National Pitcher of the Year. His work has earned him a semifinalist spot for the 2019 Golden Spikes Award and the National Collegiate Baseball Writers Association's Dick Howser Trophy.

When Small arrived in Starkville, Miss., his fastball topped out 96 miles per hour as a freshman. Since his surgery it is closer to between 86 to 92 miles per hour, which is different since most pitchers' velocity stats increase after the surgery. Where Small's game has improved is in his command and location. He earns strikes with swings and misses, and outs with weak ground balls.

In the first round of the 2019 MLB Draft, the Milwaukee Brewers selected Small with the 28th overall pick. He will have a decision to make after the season to return to MSU for a senior season or leave as he begins his path to the majors.

Small and his teammates will be in action this weekend as the Bulldogs host Stanford University in the Starkville Super Regional. Game one is Saturday, June 8, on ESPN2 with a 2 p.m. first pitch. The second game of the regional will start at 8 p.m. on ESPNU on Sunday, May 9, with a third game on Monday, May 10, if necessary, with a 6 p.m. start on ESPN2.

The winner will advance to the 2019 College World Series.