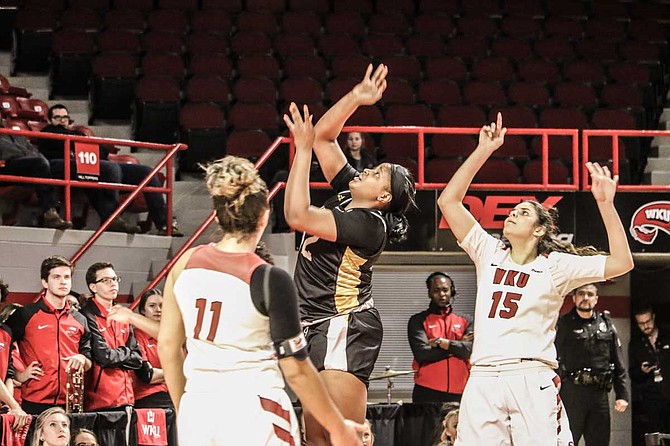 The University of Southern Mississippi women's basketball team had a rough start in Conference USA play when the Golden Eagles dropped their first four games.

However, Southern Miss could not sustain the momentum, and the team lost to Old Dominion University 53-50. Jones still stayed hot with 11 points and five rebounds.

The Starkville, Miss., native kept going strong with 14 points, 13 rebounds, two blocks and two steals in the Golden Eagles' 69-56 win over Marshall University. It was her third double-double of the season with double-digit points and rebounds.

Jones followed up her impressive string of performances with a solid game during USM's 69-56 win over Western Kentucky University. She finished with eight points, seven rebounds, one assist, one steal and one block.

After her performances against Marshall and Western Kentucky, Conference USA named her Freshman of the Week. She is the second Golden Eagle to receive a C-USA Player of the Week award.

Before heading to USMA, the former Starkville High School star led the Yellow Jackets to three straight trips to the Mississippi High School State Tournament. Over the course of her high-school career, she averaged 11.3 points per game.

She played for Hoops Dreams AAU team, as well as softball and volleyball for Starkville High School. The center was named The Dispatch's Large Schools Player of the Year for three straight years. She averaged a double-double her senior season with 15 points and 10 rebounds. She redshirted in USM's 2017-2018 season.

This season, Jones has led the team in scoring four times and in rebounding seven times. She has scored 10 or more points eight times, and collected 10 or more rebounds three times. She scored a career-high 21 points against Blue Mountain College and 17 against Southeastern Louisiana University.

Jones is averaging 8.6 points and 5.3 rebounds in 20 appearances this season. She has also collected 17 steals, 11 blocks and eight assists in her first college season.

Her development on the court will be important if the Golden Eagles are going to continue to climb the C-USA standings. Currently, they sit in ninth place with a 3-5 conference record.

Southern Miss returns to action against on Thursday, Jan. 31, at home against Florida International University. The Golden Eagles will also host Florida Atlantic University on Saturday, Feb. 2, at home.