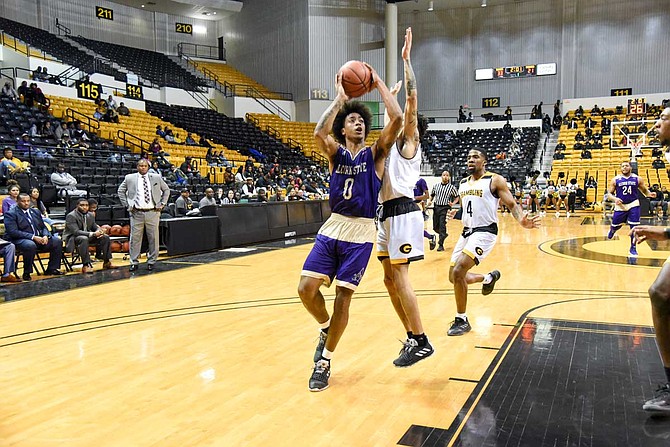 Sophomore guard Troymain Crosby might have turned the season around for the Alcorn State men's basketball team.y by Bryan Flynn

Sophomore guard Troymain Crosby might have turned the season around for the Alcorn State men's basketball team.

The Braves entered last weekend 0-4 in SWAC play and 4-12 overall. Crosby broke out for 15 points against eight rebounds, eight assists, a block and steal against Mississippi Valley State University. His play led Alcorn State to a 63-57 win for the first conference victory of the season.

Against the University of Arkansas-Pine Bluff, the Laurel, Miss., native scored 20 points, and got eight rebounds, four assists and two steals, earning ASU its second straight conference win with a 79-64 victory.

Overall, Crosby has scored double digits in eight games this season. His career- and season-high points came against Rust University when he dropped 22. He also recorded a triple-double against Champion Christian College with 18 points, and 10 rebounds and assists.

He started his current breakout performance in a game against Grambling State University when he earned 15 points (the Braves lost that game 77-42) and scored in double digits in the next two. Crosby's play in those two wins earned him conference Men's Player of the Week honors.

Crosby missed three games this season but is still averaging 11.6 points per game with 5.1 rebounds, 2.8 assists and 1.7 steals. That is up from his freshman season, in which he averaged 7.4 points and 4.3 rebounds.

As a freshman, he scored in double digits 11 times. Crosby ended his first season at Alcorn State by scoring double figures in in the final four games of the season and five of the final six games.

The Braves look to extend their conference winning streak to three games this Saturday, Jan. 26, at Alabama State University. Alcorn State will follow the Saturday game with a Monday, Jan. 28, game at Alabama A&M University.

Currently, the Braves sit tied for seventh place in the SWAC and are 3.5 games behind first place Prairie View. Alcorn State can only reach the NCAA Tournament if it wins the conference postseason tournament.