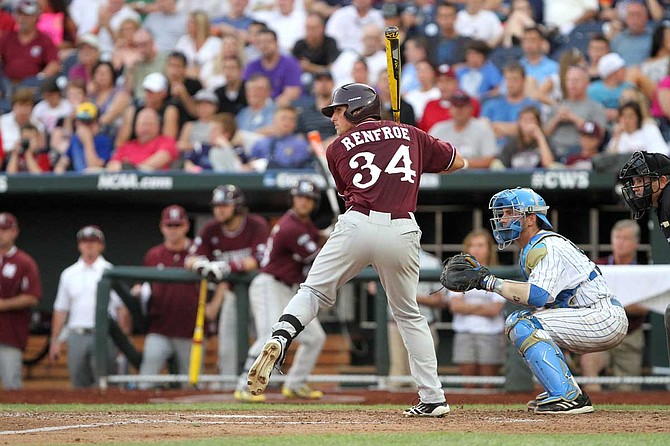 Baseball fans in the metro area are in for an exciting night at the Mississippi Sports Hall of Fame and Museum on Thursday, Jan. 24, when it hosts the Hot Stove Hall of Fame Evening. The event will feature some of the best former and current baseball players.

However, current San Diego Padres outfielder and former Mississippi State University baseball player Hunter Renfroe might be the biggest draw of the night.

The former MSU star attended Copiah Academy and set a Mississippi Association of Independent Schools record for home runs with 20, and he was named Player of the Year as a senior in 2010. The Boston Red Sox picked him in the 31st round of 2010 MLB Draft, but he chose to attend Mississippi State instead. It turned out to be a major win for the Bulldogs, as he played pitcher, outfielder and catcher as a freshman in 2011.

He hit for a .154 average with two RBI and posted a 9.64 ERA in just 20 game appearances. He was named to the SEC Freshman Academic Honor Roll before having a standout summer league season in the Big Train of the Cal Ripken League in Bethesda, Md.

In 2012, he began to make major contributions to the Bulldogs on the field. Renfroe started 60 of 61 games, raised his batting average to .252 and was ranked second on the team with 58 hits, 16 doubles and four home runs. He ended up becoming the MVP of the league.

Renfroe enjoyed a breakout season as a junior in 2013 when he started in 66 of 71 games. He hit for .294 with 92 RBI and 20 home runs. He helped MSU to its first NCAA championship appearance as the Bulldogs reached the College World Series.

Renfroe, who played mainly in the outfield, earned First-Team All-SEC, SEC All-Defensive SEC All-Tournament and NCAA Starkville Regional honors. He was a semifinalist for the Dick Howser Trophy and won the 2013 C-Spire Ferris Trophy as the best player in Mississippi at a four-year college or university.

The San Diego Padres selected him with the 13th overall selection in the first round of the 2013 MLB Draft. Renfroe spent 2013 to 2015 mostly in the minor leagues, as he moved up the ranks of the Padres organization.

The Hot Stove Fame Evening includes a reception, food, wine, beer and beverages. There will be a question-and-answer portion to the event where attendees can discuss baseball with some of the featured speakers.