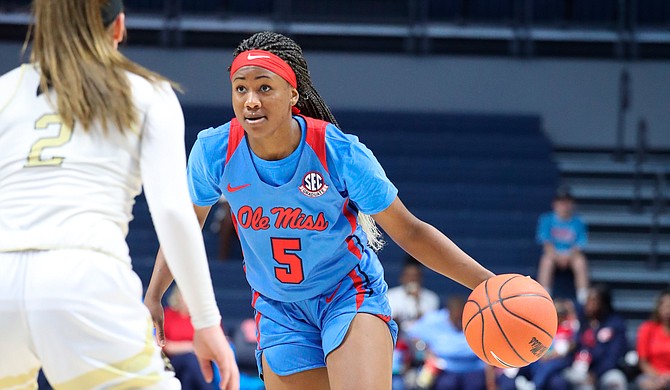 New University of Mississippi women's basketball coach Yolett McPhee-McCuin's first signing has been paying off right away. Crystal Allen, who joined the Rebels this season, is a graduate transfer from the University of Texas at Arlington.

Allen is at the third school in her college career. After graduating from Trimble Tech High School in Fort Worth, Texas, she started at Seattle University, where she became the first player in school history to be the Western Athletic Conference Player of the Week during the 2014-2015 season.

She played in 30 games and made 16 starts during her first season at Seattle University, and her efforts as a freshman earned her WAC All-Newcomer team. She entered her sophomore season as Preseason Second-Team All-WAC but played in just three games before leaving the program due to family reasons.She redshirted before playing for UT-Arlington during the 2016-2017 season, during which she played in 22 games with 12 starts. She set the program record for three-point percentage at 46.9 percent, and averaged 8.4 points and 2.8 rebounds per game.

Since beginning her time with the Rebels this season, Allen has been on a scoring tear. In her first game, she dropped 16 points on Norfolk State University. That started a seven-game streak of double-digit scoring, including 21 points against Indiana University-Purdue University Indianapolis and 26 points against the St. John's University.

Texas Christian University broke Allen's double-digit scoring streak, as she managed to score just eight points. However, she got back on track when she scored 19 points against Jacksonville State University in the following game.

She scored double-digits in three more consecutive games before making just seven points against Louisiana Tech University, a game that also ended in a close 71-80 loss for UM. Only four days later, though, Allen scored 20 points against Troy University.

The redshirt senior enjoyed a career day in the Rebels' most recent game against the University of North Florida on Dec. 28. Allen dropped 34 points on the Ospreys making 11 of 17 shots. She went nine of 15 from beyond the three-point line for the second-best three-point shooting game in Rebels history and tied for third-most in the NCAA this season.

Her efforts against North Florida earned her SEC Player of the Week honors.Allen's 34 points is the most a UM player has scored since current senior Torri Lewis's 36 points against the University of New Orleans in December 2015, and the most any player in the SEC has scored this season.

So far this season, Allen has scored double-digits in 12 of 14 games thus far, making 20 or more points in five games. She is third in the SEC in scoring with 18.2 points per game, and leads the conference in total points with 255 and three-point shots with 42.

The Rebels begin SEC play against the University of Missouri tonight, Jan. 3, at 7 p.m. on SEC Network+.