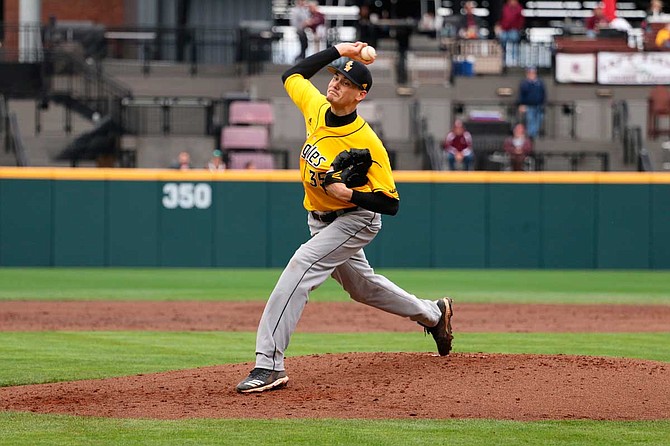 Mississippi State University and the University of Southern Mississippi have put on some great games on the baseball diamond over the last few years. The two teams played a three-game series in Starkville, Miss., this past weekend. While the Bulldogs took game two, USM was able to take game one on Friday, Feb. 22, with help from right-handed pitcher Walker Powell.

The junior pitched a career-high 7 2/3 innings, keeping the No. 9-ranked Bulldogs' bats mostly silent during the afternoon. He matched MSU pitcher Ethan Small inning for inning in a pitching duel between the two teams.

Powell recorded nine outs on first pitches and did not allow an MSU runner to get to third base when he was on the mound. Just two Bulldogs reached second base as Powell dominated from the rubber all game.

The Fayetteville, Ark., native retired the side three times during his outing and helped USM to its first shutout win of the season. Powell did not figure into the decision, as the game was scoreless when he left.

Redshirt freshman Ryan Och earned the win for the Golden Eagles after pitching 2 1/3 innings. Southern Miss took game one with a 1-0 victory in the 10th inning when pinch hitter Charlie Fischer singled up the middle to score pinch runner Brant Blaylock.

His performance against the Bulldogs earned Walker the Conference USA Pitcher of the Week award from the league office. He is the first Golden Eagle to receive the honor this season, and it is his first conference award of his career.

Powell played in 18 games during his 2016 freshman season and finished with a 3-4 record while putting up a 3.46 ERA. He gave up 44 hits on 39 innings pitched with 15 earned runs, and struck out 39 batters and walked only nine.

He missed the 2017 season with an injury and was forced to take a redshirt as he healed to return to the mound. Powell returned from injury in 2018 and posted a solid 7-3 record with a 3.80 ERA. He made 16 starts while striking out 63 batters over 83 innings with only 14 walks.

Entering this season, Powell was named to the Conference USA Preseason All-League team, with fellow players outfielder and pitcher Matt Wallner, who was named C-USA Preseason Player of the Year, infielder Hunter Slater and left-handed pitcher Stevie Powers joining him.