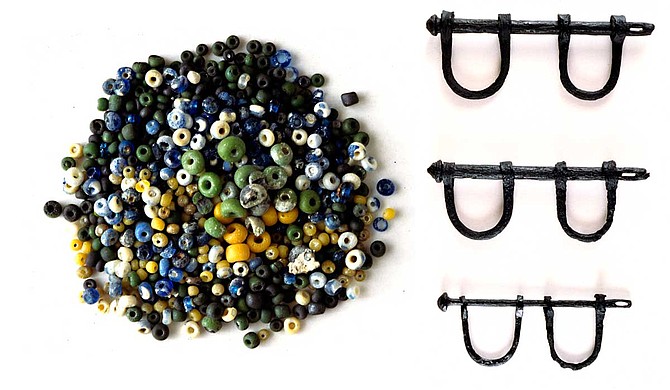 Tiny, colorful glass beads (left) found on the wreckage site of the Henrietta Marie slave ship were made in Europe. They were often used to trade for slaves. Aboard slave ships, Africans were forced to wear iron shackles (right), huddled below decks in the heat. Photo courtesy Corey Malcom/MDAH

My boots echoed on the wood as I took my first step through the "door of no return" to board the Henrietta Marie. Sounds of splashing water and distant shackles overtook me as I walked on the lower level of the circa-1699 slave-ship replica. As a young black woman, I felt chills when I looked to my right at glass figures representing human beings who were brought to America as part of the transatlantic trade.

As I initially entered the "Spirits of the Passage: The Story of the Transatlantic Trade" exhibit at the Two Mississippi Museums in downtown Jackson, I had passed the bell from the Henrietta Marie placed in front of a bold  orange wall. It sits there in a glass case, rusted and worn from the sea and wind, the words "The Henrietta Marie 1699" wrapped around it. Crewmembers used it to tell the time of day, but for the enslaved people onboard, it was a reminder of what was happening, says Pamela D.C. Junior, director of the Mississippi Civil Rights Museum.

The "Spirits of the Passage" exhibit, which the Mel Fisher Maritime Museum in Key West, Fla., is lending the Two Mississippi Museums, will be up at the Mississippi Civil Rights Museum until Aug. 11. It showcases several rare artifacts uncovered from the wreckage of sunken slave ships, and is dedicated to the merchant-slaver ship Henrietta Marie, a large vessel built in France as a privateer ship. The English captured and repurposed it as a merchant slaver ship. In the summer of 1700 on its way back home from Jamaica, the ship sunk 35 miles away from Key West, the southernmost point of the continental United States.

In 1972 while searching for the Spanish Galleon, Nuestra Senora de Atocha, treasure hunter Mel Fisher's team of divers and archaeologists partially excavated the Henrietta Marie site and dubbed it "The English Wreck." Ten years later, divers returned to the site to discover the cast bronze bell, and after carefully chipping away the underwater build-up, they revealed "The Henrietta Marie 1699."

"What's special about the Henrietta Marie is that is gives you a deeper glimpse of the transatlantic slave trade (and) the artifacts that were found on it. ... [I]t's also the only slaver really found and excavated in North America," exhibit curator Lance Wheeler says. "What I've heard and what I keep hearing is that 'I'm overwhelmed. This is painful.' It's hard to get in this space, but this is a story that we must tell and must see."

The next stop in the exhibit is Africa. The soon-to-be enslaved people were part of a much larger community on the continent as doctors, teachers, craftsmen, farmers and more, all of whom served their communities. The exhibit includes a maiden mask (an elaborate headpiece associated with beauty, peacefulness and motherhood) from an Igbo tribe, one of the largest ethnic groups in Africa.

Stepping out of the African gallery and into the next, guests will see the story of Africa's colonization. Artifacts show that a man's life was worth one-and-a-half to two-and-a-half guns, nine to 13 iron bars, or 35 to 50 pounds of glass beads. Pistols and heavy weaponry such as cannons that were stored on the slaver ships to fend off pirates are also on display. One of the glass cases in this gallery holds a cutlass, a sword so worn out that there is a large missing area of blade down the middle. A grindstone in the exhibit still has coral and shell parts attached.

Exiting that gallery, you step aboard the Henrietta Marie replica and are immediately immersed in the sounds of waves, chains and wood echoes under your feet. On the bottom of the ship, enslaved figures sit on the wood floor holding onto one another.

Directly across from the enslaved figures, the ship has a display of shackles. The smallest pair, which could fit in the palm of anyone's hands, is hung in a glass case with the rest of normal-sized shackles. Another pair of shackles that stood out has cloth around the iron. Cloth was usually wrapped around the iron to ensure the enslaved were not bruised or injured so that they would be sold at a higher price. The treasure hunters found 80 slave shackles aboard, which is rare because they were nearly always repurposed. This ship is believed to world's largest source of tangible objects from the early years of slave trade.

Stepping off the Henrietta Marie and into the new world, guests reach the green room. In the new world of America, families were put on the auction block and torn apart, never to see their loved ones again.   Once the enslaved people were sold in America, they were often put to work on cotton, tobacco or sugar fields. Men, women and children all had to work. The men had to cut the tobacco, and the women and children had to group it into bundles that were typically referred to as hands.

All those enslaved, no matter age or gender, faced punishment for trying to escape or being rebellious, which harshly set an example for the rest. The gallery also talks about the abolitionist movements and other ships that had capsized, such as The Guerro in 1827.

The final gallery displays what emancipation and slavery looked like in Mississippi. Many slaves were sold off to plantations where they picked cotton, tobacco and cut down sugar canes. These items were considered a luxury for the wealthy, but today these items are found everywhere. Seventy-five percent of the world's clothing is made of cotton, one in every three adults is a tobacco smoker (or 1.1 billion people), and 29.1 million people have diabetes.

Placards show that diets and culture that were forced onto the enslaved people affected their genetics and their health, both mentally and physically. Wheeler says that we are still feeling the effects of slavery today.

One display showcases a detailed journal of a slave owner who wrote about the slaves' workloads, whether they were sick that day, if they picked cotton and even if it was raining. Next to that detailed journal is a brick with a handprint of an enslaved person imprinted into it. The handprint is so visible and eerie, it seems as though the original hand is still pressing down.

The gallery also has a display dedicated to the "Forks in the Road," a meeting place in Natchez for slavers to buy those people who had just arrived off the river. At this particular fork in the road in Natchez, about 600 to 800 people were auctioned off daily.

"We are giving a voice to the voiceless," Junior says.

"Spirits of the Passage: The Story of the Transatlantic Trade" will be up until Aug. 11. Tickets are $10 for adults and $6 for children. For more information, visit mcrm.mdah.ms.gov.