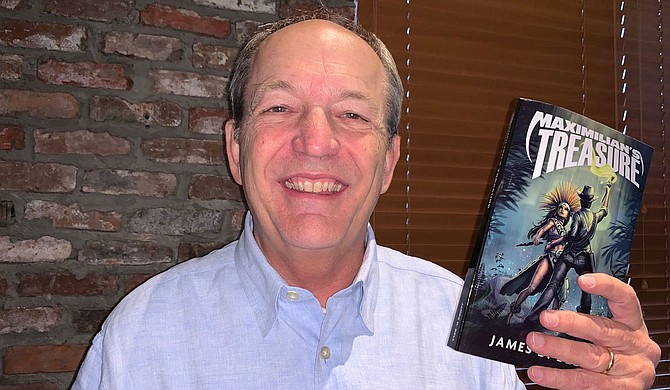 Bell based the novel on a real-life experience he had more than 35 years ago, in which an elderly Choctaw man invited Bell and a friend to his farm to help him search for a Civil War-era treasure the man believed was buried there.

As the story went, Maximilian I of Mexico, the younger brother of Austrian emperor Franz Joseph I who accepted an offer from Napoleon III of France to be emperor of Mexico during the 1800s, had supposedly tried to deliver a cache of gold to support the Confederates in the Civil War in exchange for aid against the Mexican Republic that opposed his rule, and the cache had been abandoned near the man's farm.

"We didn't really expect to find anything, but we thought it would be a fun day, so we decided to go out there," Bell says. "I did do some investigating and found that there could be a connection there. While the Monroe Doctrine wouldn't allow a European power to colonize in the Americas, France had invaded Mexico and installed Maximilian during the Civil War, so the U.S. was too distracted to address it. Maximilian wanted the U.S. to stay embattled, so there are a lot of stories about him supporting the South, and even ones about groups of people from the South going to Mexico and trying to rescue him near the end of his reign. What I learned in looking into that turned into a basis for my story."

"Maximilian's Treasure" is about two lawyers, John Brooks and Jackson Bradley, who agree to help a Choctaw family keep their farm. After the family patriarch dies in a drive-by shooting, his grandson is arrested when the murder suspects' bodies turn up on the farm scalped. Brooks defends the grandson in court and helps the family fight for the farm amidst arson and riots, while Bradley travels to Mexico after uncovering clues on the family's land about the location of a massive treasure in the Chiapas jungle, the existence of which is connected to the family's troubles and their attackers. Ultimately, both sides of the story connect to each other, and the two lawyers' efforts both come to a head for the book's climax.

Bell says that his own experiences traveling across Mexico, Peru, the Amazon, the Appalachian Mountains and the Hispaniola reefs with his son served as a large source of material for his story.

"I've spent a lot of time hitchhiking across Mexico, crossing rivers and cutting through jungles in Chiapas," Bell says. "I think I even found a temple mound that hadn't been explored, although they're everywhere out there. I also found a cave behind a waterfall that turned out to lead to another opening that was also behind a waterfall, and I thought it would make a great place for a treasure."

Bell, 66, grew up on Canton Park Drive in Jackson and attended Callaway and Murrah High School. He became interested in law after his mother, Sharlyn "Tiny" Bell, told him about his family's Choctaw heritage and how Native Americans had often gotten raw deals in court in the past. Those stories led to Bell deciding to become a lawyer and represent those who couldn't speak for themselves, he says.

He graduated from the University of Mississippi with a bachelor's degree in education in 1975 and received his juris doctorate degree from the university in 1977. That same year, he opened his own general and personal injury practice, James D. Bell, Attorney at Law, in the Barnett Building across from Jackson City Hall. In 1978, a friend named Jack Brantley came to him and asked to be a partner in Bell's firm. Brantley passed away in 1999, and Bell based the character of Jackson Bradley in "Maximilian's Treasure" on him to honor his memory.

In 1982, Bell successfully ran for county judge and held the position for six years, when he began serving as a special circuit judge. He retired as a judge and returned to his law practice in 1989, but still sometimes hears cases for the Mississippi Supreme Court in instances where one of the judges must recuse themselves from a case. He is listed in Preeminent Lawyers, Outstanding Lawyers of America and the Top 100 Attorneys of North America list, and has the highest Bar Association approval ratings of any Mississippi circuit or county judge, although the association no longer uses an approval ratings system

"I lost count of the number of trials I was involved in somewhere around 1,000, and I've heard and seen so many fascinating things in all of them," Bell says. "I fell in love with court when I first walked in, with all the real-life drama that unfolded there with people's fortunes and freedom that could turn on a question or a verdict. I returned to it because I began to see it as a ministry, where people would bring the worst problems of their lives to me to listen to and ask me to address those problems. I started writing because I wanted to put that experience on paper for others to experience the exuberance and anxiety of it."

Bell's first novel, "Vampire Defense," came out in 2012. The story, which involves a murder trial in which a man claims the person he killed was a vampire, is based on a number of unusual cases Bell served on during his judgeship and time as an attorney, he says. Among them were a case involving a conspiracy to commit murder via voodoo in Tupelo, and a high school shooting in Pearl that attracted a frenzy of media coverage and involved a satanic cult in Mississippi, during which Bell says numerous unusual people claiming to be witches and warlocks approached him to speak about the trial.

As for "Maximilian's Treasure," Bell says he wants the moral of the story and the message that readers take away from it to be one that readers find within the story for themselves so that they can treasure and be enriched from it. The book is available online at maximilianstreasure.com in physical and digital form. Physical copies are $21.95, and the e-book version is $9.95. Bell will sign copies of his book at Lemuria Bookstore on Monday, Dec. 9, starting at 5 p.m. There will be a reading following at 5:30 p.m.

Bell and his wife, Joanne, have been married for 14 years and have four children, John and Candace Bell and Christina and Michael Bull.