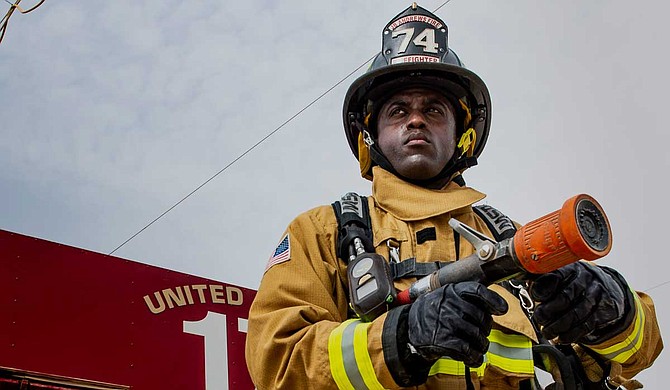 Justin A. Starks, a graduate of Lanier High School in Jackson, is stationed at Joint Base Andrews in Prince George's County, Md., as a fireman but is currently on deployment to Africa, a release from JSU says. Photo courtesy Air Force Association

The United States Air Force recently named Justin A. Starks, a Jackson native and 2015 graduate of Jackson State University, as one of its "12 Outstanding Airmen of the Year."

Starks, a graduate of Lanier High School in Jackson, is stationed at Joint Base Andrews in Prince George's County, Md., as a fireman but is currently on deployment to Africa, a release from JSU says.

The selection board at the Air Force's Personnel Center, headquartered at Joint Base San Antonio-Randolph, Texas, nominated 36 individuals who represented major commands, direct-reporting units, field-operating agencies and Headquarters Air Force in Washington, D.C. The board then chose the 12 "Outstanding Airmen" based on qualities such as superior leadership, job performance and personal achievements, a release from JSU says.

Students at Millsaps will be able to complete a degree in math, physics, chemistry, biology, geology or a related major, and an additional degree in engineering from MSU at both the undergraduate and graduate levels.

Students in the dual-degree program can be admitted to both schools. Students will spend the first two to three years at Millsaps completing coursework toward a Bachelor of Science degree, then formally enter the Bagley College of Engineering to complete the remaining coursework for an engineering degree. The program also supports graduate-level work, combining a bachelor's degree from Millsaps with a Master of Engineering or Master of Science degree from MSU, a release from Millsaps says.

Mississippi State University recently launched a new Bachelor of Applied Science degree program aimed at adults who have completed a technical associate's degree program through a community college or the military and need additional education to advance their careers, a release from the university says.

The MSU Office of the Provost will oversee the new program, while academic advising coordinators on the MSU-Meridian campus and at the Center for Distance Education will advise enrolled students.

Students can earn credits in the program through online or in-person courses. The program also allows community-college graduates to transfer up to 60 credit hours toward their respective degrees.

On Thursday, Aug. 15, the Mississippi Institutions of Higher Learning board of trustees approved a new policy outlining requirements for state universities offering such degree programs, and MSU says in its release that the university will submit the applied-science program for board approval within a few weeks.