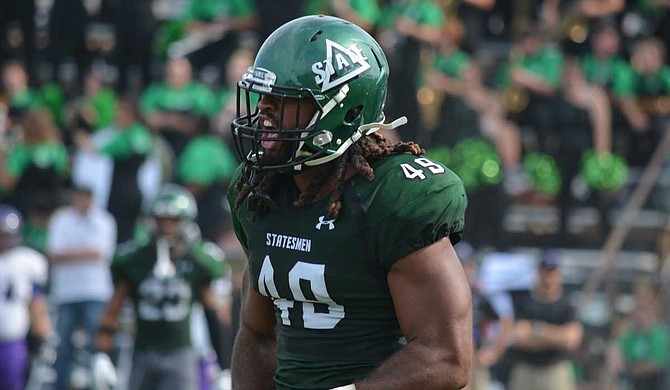 Things went horribly wrong for Delta State University right out the gate during the last football season. The Statesmen opened with seven straight losses, and any promise left before the end of September.

During the losing streak, the defense gave up an average of 33.4 points per game. The unit finished the season with a somewhat better 29.9 points per game average, placing the team at seventh in the conference.

Overall, Delta State finished with a 2-8 record and a 2-5 record in Gulf South Conference play. It was a freefall for a program that had reached the second round of the NCAA Division II Playoffs the previous season.

While offensive improvement is a must, there is plenty of work to do on the defensive side of the ball. The Statesmen will have a chance to improve in both aspects, but the defense does have a standout to lean on for the 2019 season.

Senior defensive lineman Eric Sadler earned Preseason All-GSC honors, as voted on by the league's head coaches; however, GSC also projects that Delta State will finish sixth in the conference, signifying that the rest of the coaches do not believe this is a rebound year.

Sadler played in all 10 games last season and made nine starts at defensive end. He notched 27 tackles, five tackles for a loss, four quarterback hurries, 2.5 sacks and a fumble recovery. His 2.5 sacks were good enough for 12th place in the conference.

The defensive end made a career-high six tackles against North Greenville University in 2019. One of his best all-around performances came against Shorter University when he racked up five tackles, two tackles for a loss and 1.5 sacks. He earned Second-Team All-GSC honors for his play on the field.

Prior to transferring to Delta State in 2016, Sadler played at Northeastern Oklahoma A&M College for two seasons. In those years, he played in 18 games and recorded 74 tackles, 10.5 sacks, two forced fumbles and two pass breakups. In his second season he was named First-Team All-Conference in the Southwest Junior College Football Conference.

Injury cut the Oklahoma City, Okla., native's first season with DSU cut short. In the 2016 season, Sadler played in just two games as he recorded six tackles, three tackles for a loss and 1.5 sacks. An injury also ended the 2017 season for Sadler after just four games and four starts at defensive end. He managed 11 tackles, five tackles for a loss, 3.5 sacks, two quarterback hurries and one forced fumble.

If Sadler can stay healthy and uninjured, he has a chance to bring about a dominant season. In addition to Sadler, Delta State's Preseason All-GSC selections include center Innis Cloud V and punter Sam Barge. Running backs Deion Dampiere and Rico Owens, linebacker Roddick Jarrett and defensive back Dayreke Snow were also named to the GSC Top Newcomer Team.