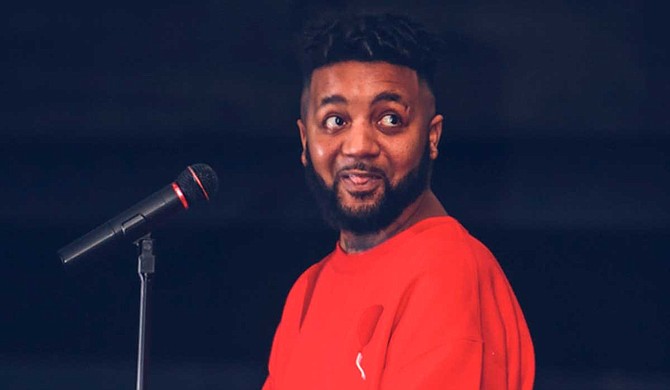 D’Andre Jones, a Jackson-native hip-hop artist who performs under the name “808 tha Bass,” is hosting an event called “Going Blue for Myositis 2” at Old Trace Park on the Ross Barnett Reservoir in Ridgeland on Sunday, Aug. 25, to raise awareness of a rare disease called polymyositis, which doctors diagnosed him with in 2013.

Polymyositis is a muscular disease that causes inflammation in both muscles and blood vessels that supply blood to the muscles, the Muscular Dystrophy Association’s website says. The disease causes weakness in the shoulders, upper arms, hips, thighs and neck, as well as swallowing problems, and inflammation of heart and lung muscle tissues.

“This is a disease that a lot of people don’t know about that I’ve suffered for more than six years,” Jones says. “I want to both raise awareness and generate proceeds to help those who suffer from this and similar illnesses.”

Jones, 35, was born in Jackson, but his mother moved with him to Joliet, Ill., when he was 6 months old. He graduated from Lockport Township High School in Joliet in 2002 and enrolled at Jackson State University later that year. In 2003, he moved back to Joliet and spent a year at Joliet Community College before deciding to return to Jackson.

“I ended up leaving Jackson the first time because things seemed slower-paced down here back then, and I think I was also just homesick after having lived in Joliet for 18 years,” Jones says. “After I moved, I soon ended up feeling like I gave up too easily, so I came back and gave Jackson another chance.

“A majority of my family, brothers and sisters and more, have always lived here, and being here lets me be closer to them. I also discovered that I loved the hospitality I found down there. Strangers were speaking to me all the time, and it really grabbed my attention how polite all the people I met were.”

After moving back to Jackson, Jones took a job at St. Dominic Hospital as a sterilization technician in 2004, in which he cleaned and sterilized the instruments doctors used for surgery. He moved on to River Oaks Hospital (now Merit Health River Oaks) in Flowood in 2009 and performed the same job. He worked at both River Oaks and University of Mississippi Medical Center in Jackson until 2011.

Jones, who says he has loved music since he was a child, also practiced as a hip-hop artist on the side along with his hospital work. In 2005, he decided he wanted to pursue music more seriously after friend Razenski Mamon asked him to be part of his Jackson-based hip-hop record label, Yeah Yeah Man, as an associate to help with the business side of the label. It wasn’t until 2008 that Mamon first convinced Jones to go into the studio to record music of his own.

“That first recording I tried, I was so nervous I almost passed out,” Jones says. “I was so anxious because having that kind of opportunity felt overwhelming to me.”

Symptoms of Jones’ polymyositis first appeared in 2012, when he tried to put a gallon of milk in his fridge and “found it took nearly everything out of him.” His muscle weakness began worsening, and soon he began frequently falling from lack of balance on his legs. By the time doctors diagnosed him in 2013, he had lost more than 60 pounds and had great difficulty swallowing. He eventually became paralyzed in nearly 80 percent of his body, he says, and doctors feared that he may become completely paralyzed and that respiratory failure would set in.

Eventually, doctors put Jones on steroid treatments once a week that lasted roughly an hour per session but didn’t relieve his symptoms. After six such treatments, he was hospitalized for more than a month and later placed in a rehabilitation facility. Finally, doctors began treating him with a drug called Privigen, which began helping him regain body function. Today, Jones still requires Privigen treatments once a week but is once again able to move on his own, record music and travel to speak about his disease.

“I stopped being able to record while I was sick, but when I became able to again I started writing songs about my experience,” Jones says. “I want to let people know that they are stronger than they may ever think they are. I want to be true to myself, and I don’t want to be a bragging artist, but I know that I need to be cool and strong to get people to sing along and motivate anyone who might be listening.”

"Going Blue for Myositis 2" is from 2 p.m. to 6 p.m. and will include a 100-foot Slip ‘N’ Slide covered in blue foam, which Jones says is the color that symbolizes polymyositis awareness, similar to how pink is used for breast cancer awareness. The event will also have raffles, music from DJ See, food trucks such as Trent’s Food Truck and Kona Ice, and more. For more information, find the event on Facebook.